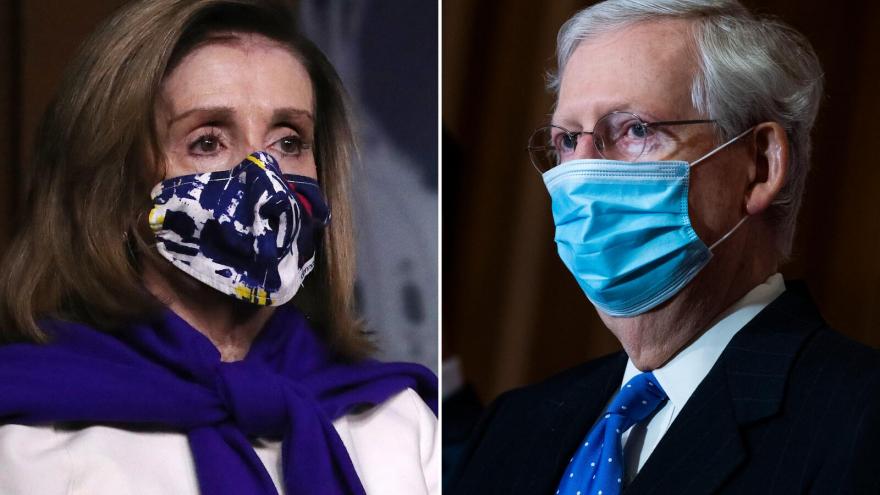 (CNN) -- Congressional leaders struggled on Thursday to hammer out a major rescue package in the final days of the 116th Congress, raising the specter that talks could drag out and potentially cause a brief government shutdown over the weekend.

With government funding set to expire Friday at midnight, lawmakers are now discussing the possibility of extending the shutdown deadline, again, to allow more time for negotiations to lock down a deal and push it through the House and Senate. The two issues are tied together since leaders want to tie the relief deal to a $1.4 trillion funding bill to keep the government open through next September.

Republican leaders have signaled they believe passing a stop-gap bill, or continuing resolution, to extend the deadline by an additional 48 hours may be necessary, but Democrats have shown little appetite for that approach and have suggested that Congress may be more likely to cut a deal quickly with lawmakers' backs to the wall.

Senate Majority Whip John Thune said Thursday it's possible a brief government shutdown could occur over the weekend because it could be difficult to pass a stopgap spending bill before the Friday deadline.

"I know people who are gonna object to that, that want to keep pressure on the process until we get a deal. So, it would take consent obviously to do a short-term CR," the South Dakota Republican told reporters Thursday.

On a conference call with Senate Democrats, Senate Minority Leader Chuck Schumer said Democrats are pushing to get the deal done immediately.

The holdup in finalizing a deal comes as lawmakers are working to sort out a number of outstanding issues, including whether and how long to extend the expiring federal eviction moratorium and whether there should be additional restrictions on eligibility for stimulus checks.

Senate Majority Leader Mitch McConnell said on the Senate floor Thursday it's "highly likely" lawmakers will need to work through the weekend and if a stopgap bill to avert a shutdown is necessary he hopes the extension will be for just a "short window of time."

Unless things change quickly, final consideration of the massive legislative package could slip to the weekend or early next week.

The consensus on Capitol Hill is that there will be a relief deal after months of bickering and stalemate. But Congress is now stuck in a waiting game as the top four congressional leaders and the White House try to iron out the fine print and haggle over the final details.

Details of what's likely to be in the plan began to emerge on Wednesday, though nothing is final until legislative text is released.

The price tag could be close to $900 billion and it's expected to include money for vaccine distribution and for schools, jobless benefits of $300 per week, roughly $330 billion for small business loans, and a new round of stimulus checks, which could be set at around $600 per individual under a certain income threshold.

While the proposal is also expected to include a $90 billion fund administered by FEMA to provide to states and cities, it will not include a large pot of money for state and local governments that Democrats had demanded. It also won't include protections from lawsuits for businesses and others that opened up during the pandemic, a key GOP priority.

Once a deal is unveiled, congressional leaders will have to corral the rank-and-file and move as fast as possible to bring the legislation to the floor of both chambers.

What's in part driving the urgency: The Georgia Senate runoff races in January that will determine the next majority. On a phone call with his conference on Wednesday, McConnell noted multiple times how the issue of direct payments has become a major issue in the races.

"Kelly and David are getting hammered," McConnell said of his GOP colleagues, Sens. Kelly Loeffler and David Perdue.

Among the issues are still to be settled is a push by Republicans to restrict the Federal Reserve's emergency lending authority, something Democrats complain would hamstring the incoming Biden administration.

Republicans argue that the move to constrain the Federal Reserve is fully in line with the intent of the March CARES Act, and comes after Treasury Secretary Steven Mnuchin last month moved to wind down emergency credit facilities, arguing it would save $455 billion unless Congress authorizes its use.

Sen. Pat Toomey, a Republican of Pennsylvania, is pushing GOP leaders to include language he's proposed to limit the Fed's authority.

"We establish in statute that no more loans can be made from these programs, which was exactly what is in the statute now," Toomey said, defending his push. "It was always intended to be a temporary facility to get us through a momentary crisis. It worked, the crisis has long passed -- the crisis for which it was designed. And so it was always intended to go away. And what we're going to do is make sure that nobody can choose to interpret the statute in a different way."

But Democrats are pushing back.

"I think it is a critical entity to continue to provide help, including to states and municipalities," said Sen. Bob Menendez, a Democrat of New Jersey who sits on the Senate Banking Committee. "I think it's spiteful to close the facility and not let them use those" funds.

Other open issues include whether and how long to extend the eviction moratorium, as some Republicans argue that providing rental assistance could be sufficient. But Democrats disagree.

"The question is whether there is one needed," said GOP Sen. Mike Crapo of Idaho, the chairman of the Senate Banking Committee. "And whether one is needed if we get an adequate Rental Assistance Program put into place. And I personally am negotiating for an effective rental assistance program that would avoid the need for an eviction moratorium."

Schumer, a New York Democrat, also is pushing for a bipartisan bill known as the "Save our Stages" act for live venue operators and other entities forced to close during the pandemic.

While the $10 billion measure has bipartisan support, it's prompted a debate about whether such industries should get a special carve-out or should instead get money from the Small Business Administration's Paycheck Protection Program, which is bound to be replenished under the deal.

The leadership continues to negotiate how Federal Emergency Management Agency money for states and cities would be structured, according to sources, something Democrats are pushing but Republicans are resisting.

The outstanding issues also include direct payments for individuals and families -- and whether there should be further restrictions on who should be eligible for the one-time checks.

"I know there's been a lot of discussion to further restrict who gets so it really helps the people who need it the most -- and that would be one way of driving that score down," said Thune of the checks, capped at $600 for individuals under a certain income threshold. He said they are looking at specific income benchmarks to make that work.

Opposition from both sides

With both sides recognizing something must pass, they'll almost certainly get the votes needed for approval. But they'll get pushback on both sides, and the criticisms have already started pouring in.

Progressive lawmakers have expressed concern that the size of the stimulus checks won't be large enough.

Sen. Bernie Sanders, a Vermont Independent, warned in a floor speech on Wednesday that the emerging agreement will be inadequate to address the devastating fallout caused by the pandemic.

"This bill has a lot in it that is good but, given the enormity of the crises that we face, it simply does not go anywhere far enough," Sanders said.

Earlier on Wednesday, Sanders, who has been demanding $1,200 checks, praised the emerging proposal for including stimulus checks even though it's expected to be lower than what he has pushed for, but he said he would keep demanding more.

There will also likely be GOP concerns about the price tag.

Sen. Ron Johnson, a Republican of Wisconsin, said "probably" when asked if it was too much money.

If lawmakers pass a stop-gap bill to prevent the government from shutting down, it will be the second time they have done so in a short period of time.

Just last week, the House and Senate both passed a short-term funding bill to extend the shutdown deadline, which had been set for December 11, by one week to this Friday, December 18, at midnight.