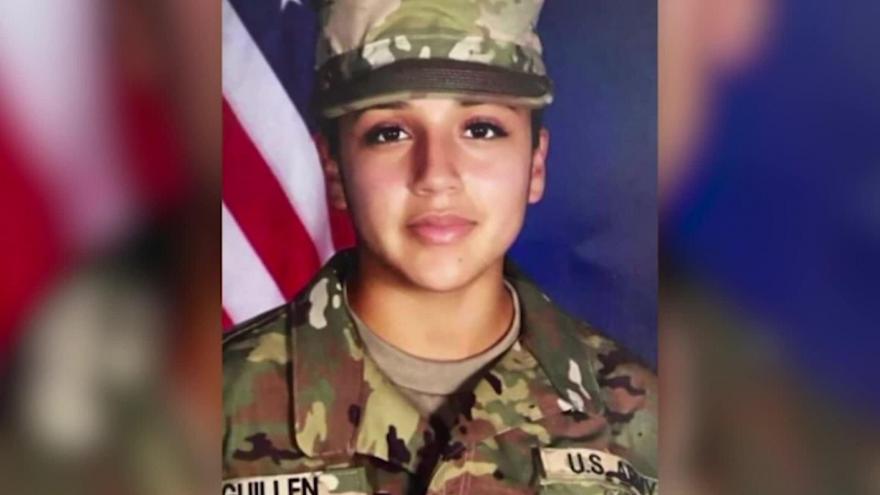 A group of US House lawmakers introduced a bipartisan bill in honor of Army Spc. Vanessa Guillen to change how sexual assault and harassment claims from US servicemembers are reported and handled in the military.

(CNN) -- A group of US House lawmakers on Wednesday introduced a bipartisan bill in honor of Army Spc. Vanessa Guillen to change how sexual assault and harassment claims from US servicemembers are reported and handled in the military.

Speaker Nancy Pelosi said in a statement she met with the Guillen family Wednesday morning and committed to bringing the bill to a vote on the House floor. The timing of the vote would be "either in the next few weeks or in November," according to the bill's main sponsor, Democratic Rep. Jackie Speier of California.

The "I am Vanessa Guillen Act" would make sexual harassment a crime within the Uniform Code of Military Justice and move prosecution decisions of sexual assault and harassment cases out of the military chain of command, according to the bill's sponsors.

In the military judicial system, the commanding officers review the criminal investigation's results and decide whether to convene a court martial to prosecute the charges.

The bill already has 73 cosponsors -- both Democrat and Republican -- in the House, Speier said.

"This piece of legislation is going to transform a tragedy into change," Speier said Wednesday during a press conference on Capitol Hill with the bill's other backers and Guillen's parents and sisters in attendance.

The bill would also require an independent prosecutor's determination as whether a case moves forward and provide an opportunity for victims to file claims with the Department of Defense for compensation, Speier said. The bill would also launch an external review by the US Government Accountability Office of the military's sexual harassment response program and its protocols for missing persons.

"In her death, she's going to serve her brothers and sisters in arms for years to come and protect those other men and women that maybe didn't have a voice beforehand, and now have a place to go," Republican Rep. Markwayne Mullin of Oklahoma said during Wednesday's press conference.

Guillen, 20, disappeared in April and her remains were found June 30 in a shallow grave, according to family attorney Natalie Khawam. Guillen was bludgeoned to death and her body was moved from the military installation by her killer, according to Khawam, who cited details the family learned from Army investigators.

The main suspect in her disappearance, another Fort Hood soldier, Spc. Aaron Robinson, killed himself in July, when he was confronted by police in Killeen, Texas.

Khawam said the family told her that Guillen had planned to file a harassment complaint against Robinson the day after she was killed.

"The Army and Ft. Hood failed her. But in her name, we make the comprehensive changes needed to stop this from ever happening again," Democratic Rep. Sylvia Garcia of Texas, the Guillens' representative in Congress, said Wednesday. "The 'I Am Vanessa Guillen Act of 2020' is a transformative piece of legislation that will save lives and help keep our women and men in this Armed Services safe."

Getting choked up, Garcia added, "While we can never bring Vanessa back, today we honor her memory."

Mullin suggested that President Donald Trump, though he hasn't seen the text of the bill, would be supportive of the legislation and "is committed to helping Vanessa's family."

Trump met with the family at the White House in July and, when pressed for support on the bill, said he would look into it.

"You have our promise that we are going to make sure that Vanessa's life has not been lost in vain. That you can proudly be reminded that her presence is going to be on every military base as it is transformed into an institution that protect its service members," Speier said, addressing the Guillen family directly.

In a statement to CNN in late July, Fort Hood officials told CNN there have been 23 deaths this year at the base.

Speier also announced that she will lead a congressional delegation to Fort Hood this weekend, where they plan to speak with enlisted soldiers, military police and police in Killeen, and visit the "crime scene and location of the remains of Vanessa Guillen."