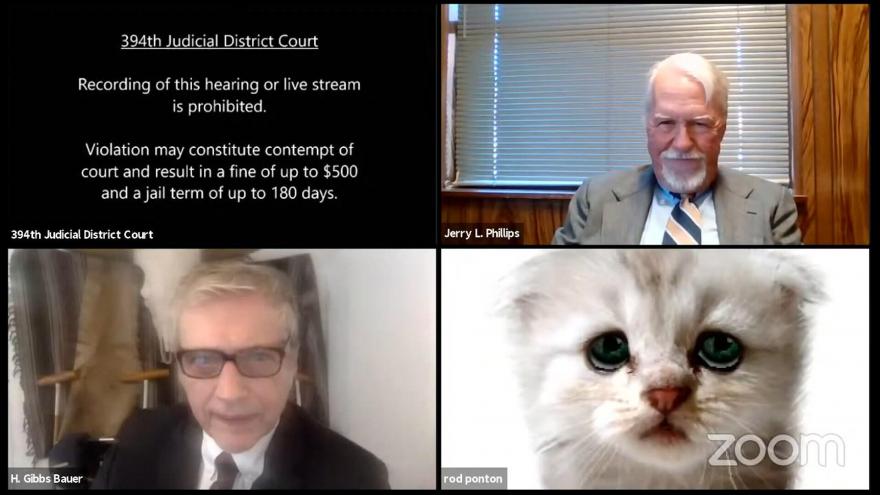 (CNN) -- A livestream of a virtual court proceeding in Texas took an "appawling" turn when a lawyer appeared as a cat on screen.

Judge Roy B. Ferguson of the 394th Judicial District Court in Texas kindly addressed the cat in the virtual room, suggesting that attorney Rod Ponton adjust his Zoom settings. The mishap on Tuesday was posted by the court's YouTube channel.

"Mr. Ponton, I believe you have a filter turned on in the video settings," the judge said.

The small, white kitten looked sad with its concerned eyes darting back and forth. The kitten opened its mouth to speak.

"Can you hear me judge?" Ponton said, appearing in the cat filter.

"It did actually happen. There was no joke involved," Ferguson told CNN via phone.

The Zoom filter was removed within seconds of that moment, Ferguson said. He added that he walked the lawyer through how to turn it off.

"When a child had been using the computer, (the child) turned on a filter," he said. "Of course, the lawyer would have no reason to even know that feature exists."

Ponton told CNN he had to use his secretary's computer for the hearing, and suspects she or her daughter had last used the cat's image.

"The cat was empathetic with me," he said. "It was as upset about it as I was."

CNN reached out to the county attorney for Presido County but did not hear back. A person who answered the phone at his office said the office was receiving a lot of calls.

Virtual hearings have been a mainstay during the pandemic and it's no different in Texas. Ferguson said Texas judges have held more than a million virtual hearings at this point.

While it may have looked very "un-purr-fessional," the judge was proud of how all sides handled the situation.

"If you watch carefully, no one mocked him or laughed at him," Ferguson said. "It just showed the professionalism and the dignity that these lawyers bring to virtual hearings."

"If a child used your computer, before you join a virtual hearing check the Zoom Video Options to be sure filters are off. This kitten just made a formal announcement on a case in the 394th (sound on)," he wrote on Twitter and posted a link to the video of the hearing.

Even Ponton saw the value in his brief stint as a feline.

"At first I was a little upset about it but as I realized that it was a viral story I tried to laugh along with the rest of the country," he said. "I think we all need a little humor after the rough luck we've had the last few months."

This tale of cat fun isn't the only video mishap to happen during the pandemic. A reporter in North Carolina for CNN affiliate WLOS broadcasted live on his station's Facebook page when a series of filters popped up. From looking like a wizard to having googly eyes on screen, the reporter carried on as a consummate professional.

Even the famous are known to make the casual Zoom slipup. Comedian Tiffany Haddish had to use the restroom during a video call and did not realize other callers could see her.

So please, heed this advice: Check your filters first, then Zoom on, my furry friends.