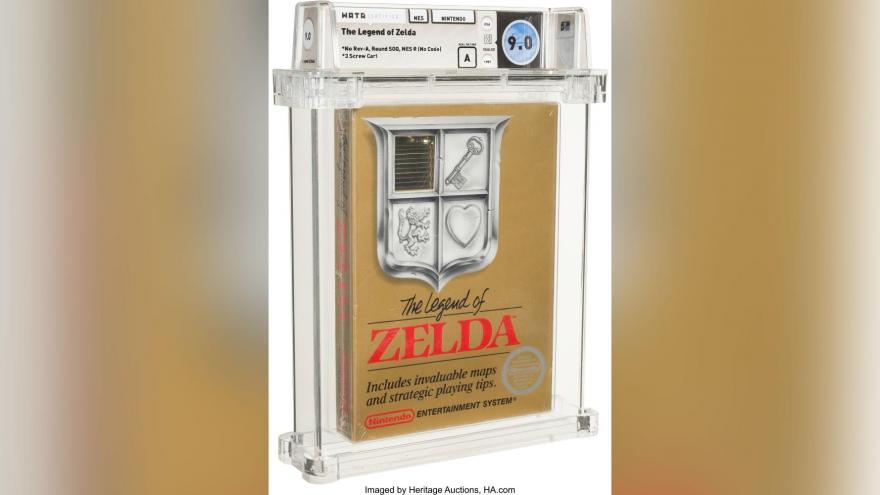 (CNN) -- A sealed, rare version of the iconic Nintendo game "The Legend of Zelda" sold for $870,000 at auction on Friday, making it the most expensive video game ever sold, according to Heritage Auctions, the auction house that ran the sale.

The copy was unopened and came from an early limited production run of the NES game dating back to a few months in 1987, the auction house said. WataGames, a professional grading company for video games, gave the copy of the game a 9.0/A grade out of a 10 scale.

Heritage Auctions described the copy as "the apotheosis of rarity, cultural significance, and collection centerpieces. A proverbial trifecta of collector perfection that only one will receive the honor of calling their own."

"I had a lot of confidence in this game, and, yet, I still feel like the reality of today's bidding exceeded my vision of how it would play out," Heritage Auctions video games specialist Valarie McLeckie said in a statement. "Making history is never an easy thing."

The $870,000 price, which includes a 20% buyer's fee, broke the record for the priciest video game, topping the $660,000 sale in April of a sealed copy of "Super Mario Bros." That copy of the game -- which had been found in the bottom of a desk drawer -- was professionally graded as a 9.6/A+ by WataGames in a sale also run by Heritage Auctions.

"The Legend of Zelda" was first released for NES in 1986 and introduced gamers to Link, Zelda and Ganon in the sprawling land of Hyrule. Thirty-five years later, "Zelda" remains one of the best-known video game franchises with over two dozen games.

Nostalgia for that and other original NES games remains strong. In 2016, Nintendo released a mini version of the NES console with 30 built-in games, including "The Legend of Zelda," for a price of $59.99.