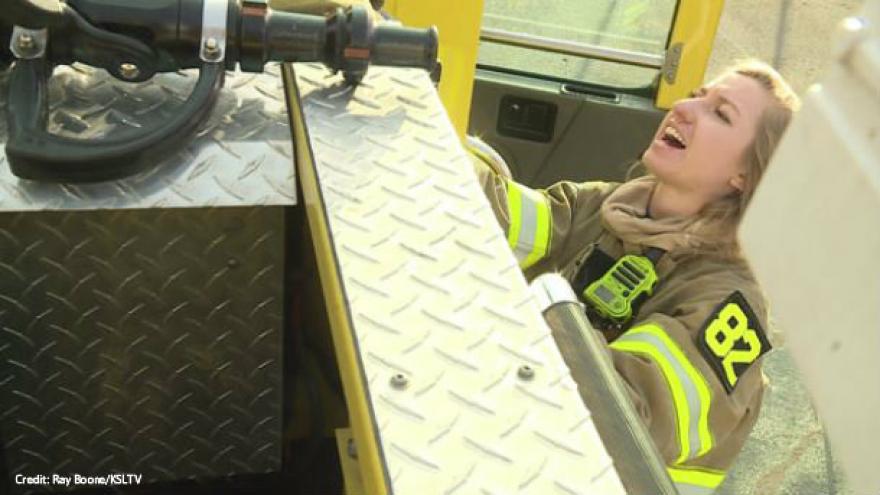 Lehi, UT (KSL) -- The day begins before dawn. Firing up fans, testing oxygen masks, sliding under the trucks with a flashlight; every 48 hours, a new shift of firefighters walks through the doors and sets about making sure they're ready to move.

"We generally take an hour to an hour and a half and go through all of our equipment," said Lehi Fire Captain Randy Harding. "We go through and make sure everything's where it needs to be so we can perform our job."

There's no doubt this team is a brotherhood. It's somewhat of a necessity, since they're living and working together — but the latest member of their team is no man. Working alongside her teammates is Aubrey Freiberg, who probably stands out from the rest of the crew because of her long blonde braid.

"This has always been sort of a destination department for me," she said. "They've got an incredible reputation, incredible opportunities here. It's a fast-growing area. Lots of good guys to work with."

For the first time ever, a woman has joined the ranks of the full-time firefighters of Lehi. While most take a more traditional route to putting on the helmet, her path was a little different.

"You talk to a lot of guys who just knew from the moment they were born," Freiberg said. "I was studying biology at the U, and absolutely knew I would end up somewhere in the medical field. I took an EMT course, and all my instructors were firefighter paramedics and firefighter EMTs, and I was hooked."

"Lehi has only had full-time firefighters since 2005, and we started with one station with three people," Harding said. "It's just kind of been that process of evolution, where now we have three stations, we have roughly around 50 people now we're getting female firefighters."

Whether you're new on the job or spent decades riding on a fire truck, training is a constant. On this day, the crew heads to a local grocery store, raising the ladder and climbing up to the top — a "simulated rooftop ventilation," as Harding calls it.

Joining the team is yet another one of Lehi's new recruits — Freiberg isn't alone in breaking new ground at the department.

"My father is a battalion chief for Salt Lake City, and they were just waiting for me to decide to go through," said Celeste Carter, Lehi's other female firefighter. "The biggest thing that appealed to me about it was the sense of community. Going out, being able to help people and being able to make a difference."

While everyone here loves the work, there's no doubt it's a challenge — and that's especially evident when the team is climbing up their ladder to get on the grocery store's roof. Weighed down with equipment, the firefighters' training involves preparing as though they were fighting an actual fire, which means they're dragging heavy hoses and hefting saws up and down the ladder.

Carter and Freiberg both agree the work can be grueling, but take pride in being able to meet all of the department's standards.

"We are held to the same standards and expectations everyone else is held to," Freiberg said. "And that's how it should be."

To the firefighters they share a truck with, they're just one of the guys — but both women hope to be the first of many.

"Hopefully inspire other females to come and join the fire service," Carter said.

"I have four daughters at home," Harding said. "They were actually super excited to come and meet a female firefighter. It definitely gets that message out to the community that this job can be for anyone that wants to do it."

To Freiberg and Carter, the job isn't just about saving lives — it's about making sure this brotherhood will always include a few sisters.

"I think nowadays, females are leaning into jobs and careers that maybe they necessarily haven't leaned into before," Freiberg said. "But now that we know we can do it, we should do it, right? It's the best job in the world. Any little girl out there that wants to do it can do this."