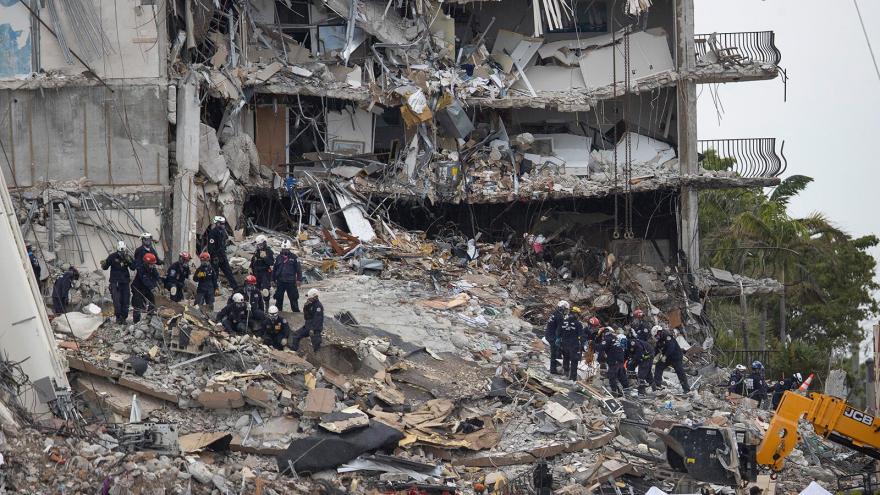 A correspondence from the board president of Champlain Towers South, pictured here on June 28, in Florida, which unexpectedly crashed to the ground, describes the progression of decay since 2018 saying, "the observable damage such as in the garage has gotten significantly worse since the initial inspection."

(CNN) -- A correspondence from the board president of Champlain Towers South, part of which unexpectedly crashed to the ground last week in Surfside, Florida, describes the decay at the building since 2018 saying, "the observable damage such as in the garage has gotten significantly worse since the initial inspection."

Board President Jean Wodnicki addressed the letter to neighbors April 9.

"The concrete deterioration is accelerating. The roof situation got much worse, so extensive roof repairs had to be incorporated," says the letter, acquired by CNN's "Erin Burnett OutFront."

Wodnicki further describes issues facing the building saying, "When you can visually see the concrete spalling (cracking), that means that the rebar holding it together is rusting and deteriorating beneath the surface."

The letter surfaced as lawsuits are being filed seeking damages in the deadly collapse. A third such suit was filed Monday by Raysa Rodriguez, a ninth-floor resident who was asleep when the building partially collapsed, and others. The class action suit alleges the condo association's "reckless and negligent conduct" caused the disaster.

A 2018 survey outlining problems with the building was a "major red flag," said attorney Adam Schwartzbaum, whose grandparents lived in the building and complained of garage leaks before moving out about a decade ago.

"Based on our investigation, there were many warnings signs more than 10 years ago -- maybe even longer," he told CNN.

CNN has reached out to representatives of Champlain Towers South condominium association for comment.

A huge portion of the building tumbled to the ground Thursday. The death toll stands at 11, and scores remain unaccounted for.

When asked by CNN's John Berman about whether he received the 2021 letter from Wodnicki, Champlain Towers South resident Erick de Moura said he did receive the letter.

The letter confirms what Surfside Mayor Charles Burkett has been saying all along, he said: "There was something very, very wrong at this building.

"Buildings in America just don't fall down like this. This is a third-world phenomenon, not a first-world phenomenon. ... I think from the perspective of a condominium association, which is just like a homeowner except bigger, they probably don't grasp the intensity of the issue and probably just thought it was a pro forma sort of operation we have to get around to doing. Obviously, that was a fatal mistake."

A structural field survey performed in 2018 by Morabito Consultants Inc., found several things wrong with the building, including major structural damage below the pool deck, according to the report.

"The failed waterproofing is causing major structural damage to the concrete structural slab below these areas," the report says.

In a statement to CNN since the collapse, Morabito Consultants wrote that the report "detailed significant cracks and breaks in the concrete."

The report didn't say whether the structure was at risk of collapse, but the group said it provided an estimate to the condo association to "make the extensive and necessary repairs."

The April letter seeks to explain a $15 million special assessment to condo owners that would be discussed at an upcoming meeting. The initial scope of the 2018 work estimates had expanded, the letter says.

"Other previously identified projects have been rolled under the main project. New problems have been identified. Also, costs go up every year. This is how we have gone from the estimated $9,128,433.60 cited in Morabito's 2018 report, to the much larger figure we have today," it says.

The board later approved the $15 million dollar in repairs, according to an assessment letter obtained by CNN.

John Pistorino is a structural engineer hired by attorneys representing unknown clients to look into what happened, he said. While he didn't want to comment extensively on Champlain Towers South, he told CNN "there could be explanations" for the concrete deterioration cited in the letter.

If engineers felt there were urgent issues with the structure, the local building official should have been informed. If that official, too, were alarmed, she or he could have had an independent engineer evaluate the problem, he said.

Pistorino is one of several engineers, hired by various entities, who will be investigating the collapse, he said.