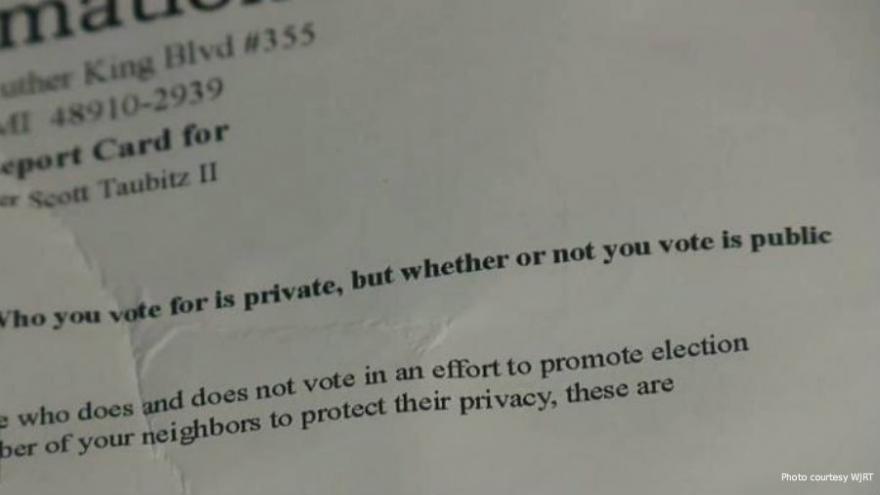 Swartz Creek, Michigan (WJRT) -- Many people's mailboxes are stuffed with campaign literature in the days and weeks leading up to an election.

But a mailer that a Swartz Creek neighborhood received raised more than a few eyebrows. Instead of a message stumping for a candidate or issue, the letter laid in black and white each family's voting record -- and that of some neighbors too.

"Kind of strange and an invasion of privacy," Kris Taubitz said.

She normally tosses campaign mailers straight in the trash without giving them much thought. But the three identical envelopers addressed to herself, her husband and her son caught her attention.

Curiosity got to her, so she opened the envelopes.

"You know I was just cleaning house today and happened to open it up and was just shocked," Taubitz said.

The letters from The Center for Voter Information show the family's voting records dating back to 2010. One column shows Taubitz's name and her husband's name with the years they voted.

Below are spaces of other names, along with when and if they voted.

"It's so much going on right now to kind of say, 'Hey, maybe you need to look into whether your neighbors are voting too,'" Taubitz said. "It seems kind of like the wrong thing. It kind of adds on to that nosiness."

Taubitz says what's odd with one of these letters is one was addressed to her one of older sons. He couldn't vote back in 2010 because he wasn't old enough.

She says it could have been a mix up because her son and husband share the same name.

The letters don't show what the family voted for, just a simple yes or no of whether they cast a ballot. The letters point out votes are private, but everyone's voting record is public information.

The letter gives a sentence of why they mailed this information out to this family.

"They are mailing this to let us know who is voting ... to share who does and does not vote in an effort to promote election participation," Taubitz said.