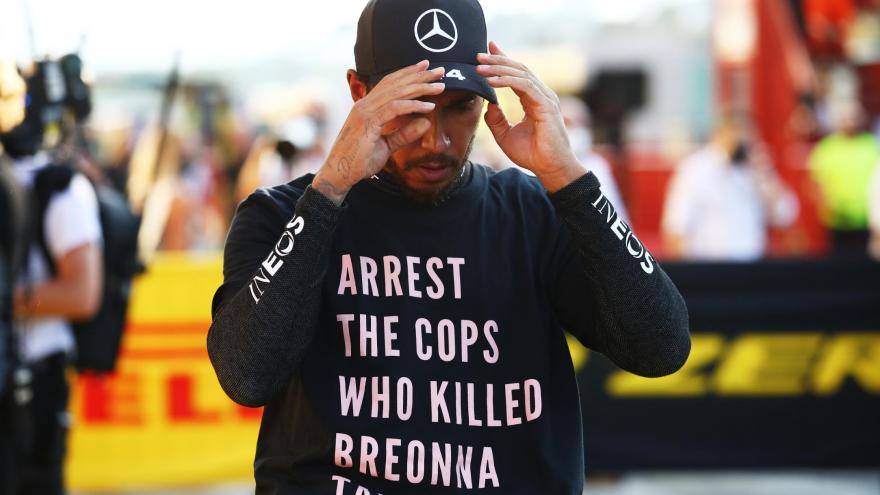 (CNN) -- Lewis Hamilton wore a T-shirt remembering Breonna Taylor on the six-month anniversary of her death when he took to the victory podium Sunday after winning the Tuscan Grand Prix at Mugello, Italy.

The six-time Formula One champion's shirt had "ARREST THE COPS WHO KILLED BREONNA TAYLOR" written on the front and "SAY HER NAME" above a photo of Taylor on the back. He wore the shirt before the race and at the podium ceremony.

Taylor, a Black woman, was fatally shot in her Louisville, Kentucky, apartment by police officers executing a "no-knock" warrant on March 13 of this year.

An investigation into the incident is being conducted by Kentucky Attorney General Daniel Cameron and the FBI is investigating whether Taylor's civil rights were violated. Taylor's mother has filed a lawsuit in civil court against the three officers.

Hamilton tweeted photos of himself wearing the T-shirt calling for the officers' arrest.

"It's been 6 months since Breonna Taylor was murdered by policemen, in her own home. Still no justice has been served. We won't stay silent," he posted.

Hamilton is Formula One's first and only Black world champion in its 70-year history and has been one of the leading voices in British sports supporting the Black Lives Matter movement.

In July, Hamilton said Formula One must do more in the fight against racism as he criticized some of his rival drivers for not taking the issue seriously enough.

His comments came after he won the Hungarian Grand Prix where he was left frustrated by the lack of unity on display.

In June, he attended a Black Lives Matter protest in London and announced plans to set up a commission in his name to increase diversity in motorsport.