Liberty University says school's leadership is in talks with Jerry Falwell Jr. about his fate as president 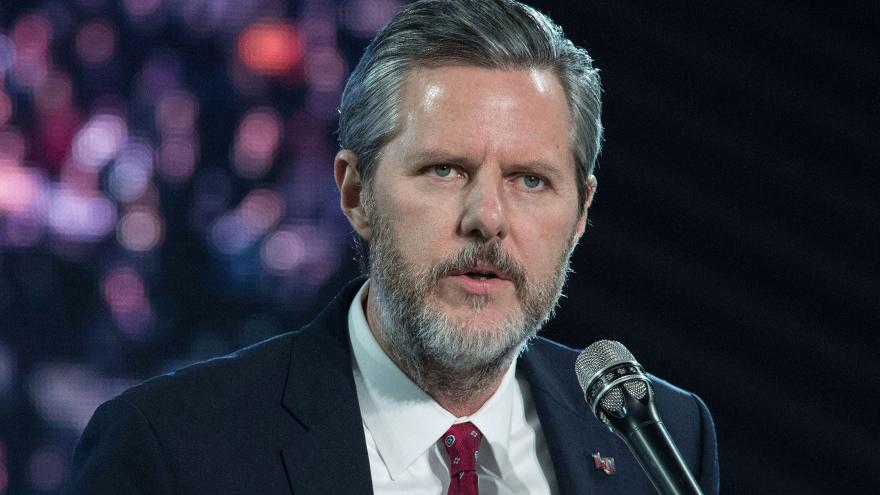 (CNN) -- Embattled evangelical leader Jerry Falwell Jr. is in discussions with Liberty University about his fate as president of the Christian school founded by his late father, a school spokesman told CNN.

While Liberty spokesman Scott Lamb originally told CNN Falwell would resign, he now says that Board leadership have been in discussion with Jerry Falwell and expect to be able to make a statement on Tuesday.

But Falwell denied that he was resigning, telling Virginia Business that the report was "completely false."

The confusion over Falwell's fate comes after a series of recent public controversies about his behavior.

A Miami man is saying he had an eight-year affair with Falwell Jr.'s wife after he met the couple at a Miami hotel. In a statement to CNN, Falwell Jr., acknowledged the affair.

Falwell Jr., 58, who was on leave from the school, issued a lengthy statement Sunday saying he and his family were blackmailed by the man, who had an "inappropriate personal relationship" with his wife Becki.

In his statement, obtained by CNN and first reported by the Washington Examiner, Falwell Jr. said the affair led to stress, weight loss and the feeling that he was "living on a roller coaster."

Conflicting stories about what happened

Falwell Jr. did not identify the man. But Giancarlo Granda told CNN he is the person who is referenced throughout Falwell's statement.

In an exclusive interview with Reuters, Granda said he was 20 years old in 2012 when he met the couple while working as a pool attendant at the Fontainebleau hotel in Miami and began a relationship in the same month with Falwell Jr.'s wife, Becki. Throughout the relationship, Granda said Falwell Jr. "enjoyed watching from the corner of the room" as he and Becki had sex.

Granda told Reuters he and Becki had sex "multiple times per year" at hotels in Miami and New York and at the Falwells' home in Virginia.

Neither Falwell Jr. nor Becki Falwell have commented on Granda's description of the affair.

However, a spokesperson for both Falwells said the claim that Jerry observed the two having sex was untrue and pointed to a specific line in his statement where Falwell said: "Becki had an inappropriate personal relationship with this person, something in which I was not involved."

When contacted Monday by CNN, Granda said via text message, "I've been working with an investigative team," in an apparent reference to the Reuters story. "The Falwells are attempting to get ahead of the story by creating a false narrative. The truth is coming soon."

Granda declined to answer further questions on the record.

Granda told Reuters his friendship with the Falwells eventually soured in part because he wanted to dissolve his ties with the couple and fell into a business dispute with them.

But Falwell, in his statement, claimed Granda was trying to blackmail him and his wife.

"Even years after the improper relationship had ended, this person continued to be aggressive with Becki and me in a variety of ways. We finally decided that we had to further withdraw completely from him, which resulted in him stepping up his threats to share more outrageous and fabricated claims about us," Falwell said.

"Eventually, he began threatening to publicly reveal this secret relationship with Becki and to deliberately embarrass my wife, family, and Liberty University unless we agreed to pay him substantial monies," he added.

The revelation adds new depth to Jerry Falwell Jr.'s swift and remarkable fall from grace. In June he apologized after deleting a much-criticized tweet that showed one person in black face and another in a Ku Klux Klan hood and robe.

On August 7, Liberty University's executive committee said they asked Falwell Jr. to take an "indefinite leave of absence" after he posted a photo on Instagram that showed him with his pants unzipped and his midsection visible. In the photo, Falwell is holding a cup of dark liquid and has one arm around a woman whose shorts are also unzipped.

In a radio interview soon afterwards, Falwell Jr. said the woman was his wife's assistant. He said the pair were at a costume party and "it was just in good fun," but added he should never have posted the photo and said, "I've apologized to everybody and I promised my kids I'm going to try to be a good boy from here on out."

Falwell Jr. was one of the first evangelical leaders to endorse Trump when he ran for president. He remained a strong supporter after the President took office in 2017, irking some Liberty students and former employees who believe Trump doesn't share their values.

Monday was the first day of fall classes at the university, which was founded in 1971 by Falwell's father, the Rev. Jerry Falwell, a conservative Christian stalwart and founder of the Moral Majority movement. Jerry Falwell Sr. died in 2007.

This story is being updated.