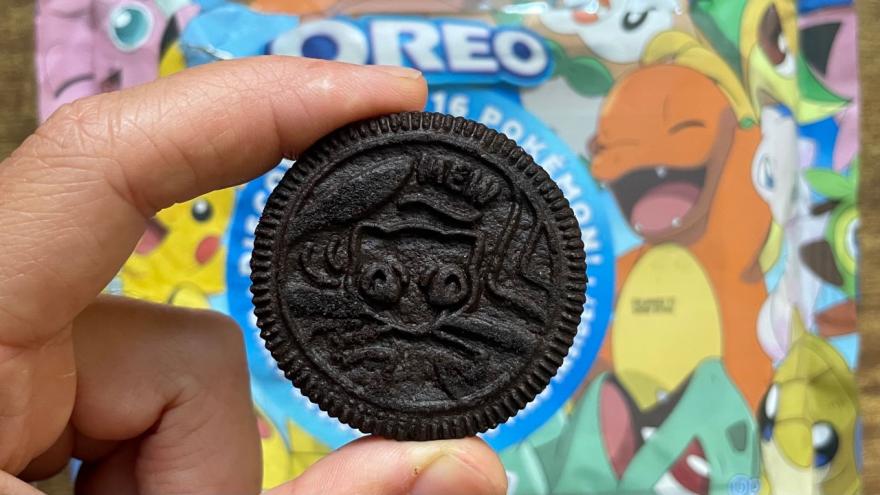 (CNN) -- How much would you pay for an Oreo cookie? For some, the answer could be thousands of dollars -- as one hard-to-find Oreo cookie featuring a rare Pokémon is fetching a hefty price tag on eBay.

The new Oreo collaboration with Pokemon debuted earlier this month, with cookies featuring various Pokémon embellished into the chocolate. But some cookies are more rare than others -- with some Oreos featuring the extremely uncommon Mew, a psychic mythical Pokémon.

In the world of Pokémon, seeing a Mew is almost akin to seeing a unicorn. And, as art imitates life, finding a Mew Oreo cookie is just as miraculous in its own way. So much so that the cookies featuring Mew are now being resold on eBay for thousands, with one seller asking for as much as $10,000 for the cookie.

CNN reached out to Mondelez International, which owns Nabisco -- maker of popular snacks such as Oreos and Ritz Crackers -- for comment on the resale value of these cookies, but did not receive a response.

Even though the Pokémon Oreos taste exactly like other non-Pokémon Oreos, social media has been alight with raves and reviews of the cookies. One YouTuber, Jason Mazurek, reported that he went to eight different stores to find the coveted cookies, while one Pokémon card social media account posted a photo of a grocery store display of the Oreos, writing, "Gonna buy all the cookies and then re-sell them for a zillion dollars."

And on Instagram, the tag #pokemonoreos is attached to nearly 2,000 posts, with many users showing off their found Mew cookies.

Pokémon has long boasted a dedicated fan base. In the midst of the Covid-19 pandemic, the value of Pokemon cards skyrocketed so much that some cards were sold for hundreds of thousands of dollars -- this included a rare Charizard card that fetched $400,000. The situation got so out of hand that in May, Target temporarily stopped selling both sports and Pokémon cards in stores, after a violent dispute broke out at at one of the retailer's Wisconsin locations.

The frenzy over the cookies extends further than interest in the rare Mew cookies -- some sellers are simply reselling entire packs of Pokémon Oreos, while others sell a collection featuring all 16 Pokémon cookies.

The Oreo-Pokémon collaboration was initially announced amid a strike by employees at Nabisco, which led some Pokémon enthusiasts to steer away from collecting the cookies. The strike ended on September 18.