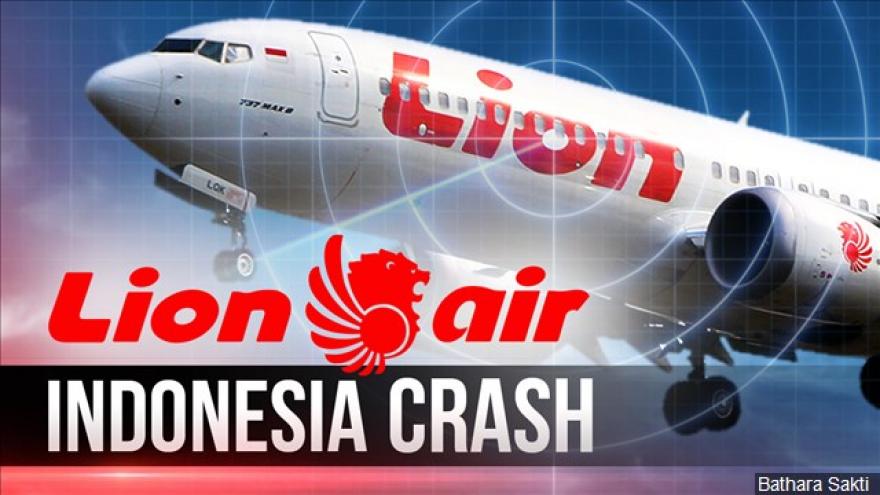 Indonseian Navy divers have recovered the cockpit voice recorder, one of two so-called \"black boxes,\" from Lion Air Flight 610. The discovery could help solve the mystery of why the brand-new Boeing 737 MAX 8 plunged into the Java Sea, killing all 189 people on board. Photo courtesy Bathara Sakti

(CNN) -- Indonesian Navy divers have recovered the cockpit voice recorder from Lion Air Flight 610, a discovery that could help solve the mystery of why the brand-new Boeing 737 MAX 8 plunged into the Java Sea, killing all 189 people on board.

Divers and crew cheered when the device was lifted onto the deck of a ship Monday morning local time.

The cockpit voice recorder (CVR), which is one of two so-called "black boxes," was buried under eight meters (26 feet) of mud on the seabed and was found inside the current search area of 500 to 1,000 meters (546 to 1,093 yards) from the crash site, Navy spokesman Lt. Col. Agung Nugroho told CNN.

The recovery of the device, more than two months after the crash, is a significant breakthrough for investigators trying to piece together the final moments of Flight 610. The focus will now be on retrieving the data that investigators hope will contain audio of the pilots' conversations.

Col. Agung was unable to provide further details on the condition of the CVR but a press conference is expected later Monday.

Aviation expert Geoffrey Thomas said it was an "exceedingly important discovery" and there was no reason authorities should not release the audio or transcripts to the public.

"The Indonesians are very conscious that the whole world is looking at them. I'm sure that the NTSB (National Transportation Safety Board) of the US will put enormous pressure to release it," said Thomas, who is editor-in-chief of AirlineRatings.

The plane's flight data recorder was pulled from the seabed on November 1 but the CVR was detached from it and believed to buried under a thick layer of mud.

The plane, a new Boeing 737 MAX 8, was carrying 181 passengers, six cabin crew members and two pilots. It was heading from Jakarta for Pangkal Pinang on the island of Bangka.

A preliminary report from data retrieved from the flight recorder showed pilots repeatedly fought to override the plane's automatic safety system, which pulled the plane's nose down more than two dozen times before the crash -- but the CVR would be needed to reveal what pilots were saying and why the safety feature was not turned off.

According to the report, the pilots first manually corrected an "automatic aircraft nose down" two minutes after takeoff and performed the same procedure again and again before the plane hurtled nose-first into the Java Sea.

A different flight crew had experienced the same issue on a flight from Denpasar to Jakarta the previous day, but had turned off the automatic safety feature, known as the maneuvering characteristics augmentation system (MCAS) and took manual control of the plane.

The system is new to Boeing's MAX 8 planes and automatically activates to lower the nose to prevent the plane from stalling, based on information sent from its external sensors. Indonesian investigators have already pointed to issues with the plane's angle-of-attack (AoA) sensors, which had proved faulty on earlier flights.

Analysts said finding the cockpit voice recorder was imperative if investigators are to determine whether the crash has implications for other airlines collectively operating thousands of Boeing 737 flights around the world each day.

A lawsuit against Boeing related to the crash was filed in late November. The family of Harvino, the pilot in charge of the Lion Air plane is suing the company, claiming that the MAX 8 had an unsafe design. The suit alleges Boeing failed to communicate information about a new safety feature that hadn't existed in previous 737s.

Speaking to CNN on Monday, the sister of Lion Air co-pilot Harvino said she was happy the CVR had been found. "I'm really happy because we can know more about the causes of the incident," Vini Wulandari, 36, said.

Harvino left three children, a girl aged eight and two boys aged six and 18 months. "Life has changed a lot since the crash," Wulandari said. "He had three little children. They will grow up without a father and it makes us very, very sad."

Lion Air's operational director has accused Boeing of withholding information from pilots in the manuals about the feature that automatically lowers the airplane's nose to prevent or exit a stall.

"We are confident in the safety of the 737 MAX. Safety remains our top priority and is a core value for everyone at Boeing," a spokesperson said at the time.