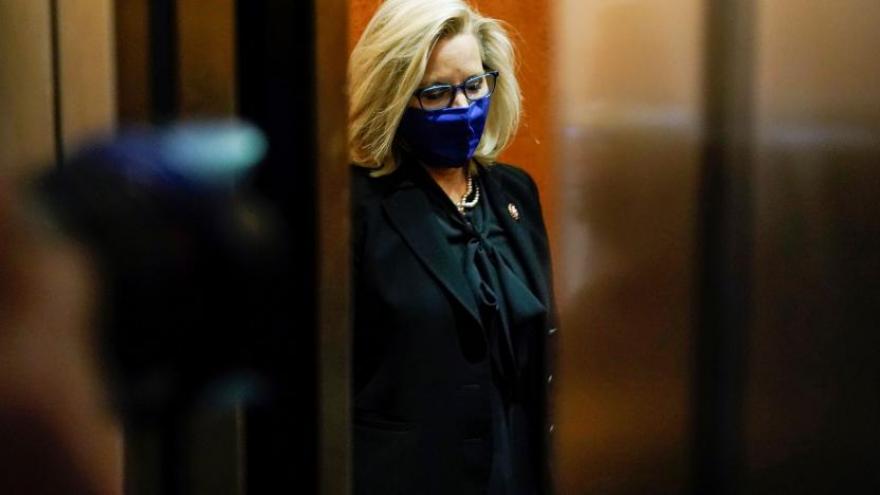 Rep. Liz Cheney is expected to lose her post in the House Republican leadership on May 12 after publicly rejecting for months former President Donald Trump's lie that he won the 2020 presidential election.

(CNN) -- Rep. Liz Cheney lost her post in the House Republican leadership on Wednesday after publicly rejecting for months former President Donald Trump's lie that he won the 2020 presidential election.

House Republicans ousted Cheney in a voice vote behind closed doors, so there will be no tally of those who supported or opposed her. The conference is expected to replace her with New York Rep. Elise Stefanik, who has a less conservative voting record than Cheney but has emerged as one of Trump's top defenders.

Cheney did not back down in a speech before the vote, calling out Trump and other Republicans who aided his efforts to overturn his loss and charging that she would lead "the fight to restore our party and our nation to conservative principles."

"We cannot let the former president drag us backward and make us complicit in his efforts to unravel our democracy," said Cheney. "Down that path lies our destruction, and potentially the destruction of our country."

When Cheney criticized Trump in her remarks, she was booed, according to a House member in the room.

"If you want leaders who will enable and spread his destructive lies, I'm not your person, you have plenty of others to choose from," Cheney added. "That will be their legacy."

Cheney was one of only 10 House Republicans to vote to impeach Trump for allegedly inciting the deadly riot at the Capitol in January, when Congress voted to certify the election. She said at the time that "there has never been a greater betrayal by a President of the United States of his office and his oath to the Constitution."

Despite her feud with Trump, House Republicans overwhelmingly voted in early February to keep Cheney as the No. 3 House Republican, who is in charge of executing the conference's message to the public.

Unlike that vote a few months ago when she worked behind the scenes to fend off the push for her ouster, Cheney is not whipping her colleagues to stay in her position. A senior GOP member of Congress who supported Cheney then told CNN he has not heard from her ahead of Wednesday's vote.

Cheney's renunciation of Trump has drawn a stark contrast with House Republican Leader Kevin McCarthy, who traveled to Trump's Mar-a-Lago resort after saying that Trump bore responsibility for the attack on the Capitol. While McCarthy previously supported Cheney, he now backs Stefanik for the House GOP's No. 3 role.

The relationship between McCarthy and Cheney started to crumble a couple weeks after the vote on her leadership in February, when a reporter at a press conference asked if Trump should speak at the Conservative Political Action Conference.

McCarthy said "yes," while Cheney said, "I don't believe that he should be playing a role in the future of the party or the country."

McCarthy then ended his appearances at press events with Cheney, raised questions about the election and distanced himself from her attacks.

Cheney's remarks last week seemed to be McCarthy's last straw. After Trump attempted to rebrand his loss as "THE BIG LIE!," the Wyoming Republican noted that the 2020 election "was not stolen" and tweeted that "anyone who claims it was is spreading THE BIG LIE, turning their back on the rule of law, and poisoning our democratic system."

Well aware that the other members of the House GOP leadership are men, Trump, McCarthy, House GOP Whip Steve Scalise and others quickly backed Stefanik, who has worked to elect more Republican women in Congress.

"Everyone in leadership serves at the pleasure of the conference," McCarthy said on Fox News last weekend. "We want to be united in moving forward."

When asked Tuesday if Cheney pushed back too much on Trump, Scalise argued it wasn't about Cheney's comments on the former President specifically, but rather how her comments detracted from Republicans' larger message.

"It's not about right or wrong, it's about the focus of our conference, and focusing on pushing back on the agenda that's being pushed by the Biden administration," Scalise said Tuesday.

Stefanik's approval of Trump has increased along with her upstate New York district, which supported Barack Obama in 2012 but went for Trump in 2016 and 2020. In 2016, the congresswoman backed Trump as the party's presidential nominee, but occasionally criticized him and wouldn't say his name when asked who she'd support.

Early in the Trump presidency, she aligned herself with then-House Speaker Paul Ryan and focused on her work on the Armed Services and Intelligence committees. She also broke with Trump on some key priorities, including his decision to withdraw the US from the Paris climate accord and the 2017 GOP tax bill.

But when House Democrats moved to impeach Trump for the first time in 2019, Stefanik emerged as one of the President's most outspoken defenders. She earned Trump's praise in the process; the President called her "a new Republican star."

In January, Stefanik objected to certifying Joe Biden's election, and supported a Texas lawsuit that sought to overturn the results of it in battleground states Trump lost. The Supreme Court rejected the lawsuit, saying Texas lacked standing to throw out the results in other states.

Stefanik has continued to cast doubt on Biden's victory, saying last week that she "fully" supports a controversial Republican-led audit in Arizona, where Biden narrowly won.

There is no evidence of widespread voter fraud in the 2020 election. But some House Republicans who supported Cheney in February have said her continued rejection of Trump's false claims have fractured the party's message as it seeks to win back the House in 2022.

Even before Monday's vote, Cheney had been looking beyond her expulsion from House GOP leadership to the next steps of her plan to fight for the future of the Republican Party, enlisting the help from alumni of the Bush administration and other conservatives who have already spoken out against Trump.

Three people familiar with these conversations tell CNN that Cheney has become more actively engaged with Republicans outside of the House conference in recent days, talking and strategizing with these allies about her path forward. The first piece of the plan came in her pointed speech on the House floor Tuesday night, when she said that "those who refuse to accept the rulings of our courts are at war with the Constitution."

One friend described the speech "as a model for her path forward."

In the coming days, the next steps of the plan will become clear, including an effort to "rally the voices of Republicans who share her view," another GOP confidante says. Cheney intends to make clear that she is has "no intentions of abandoning the Republican Party."