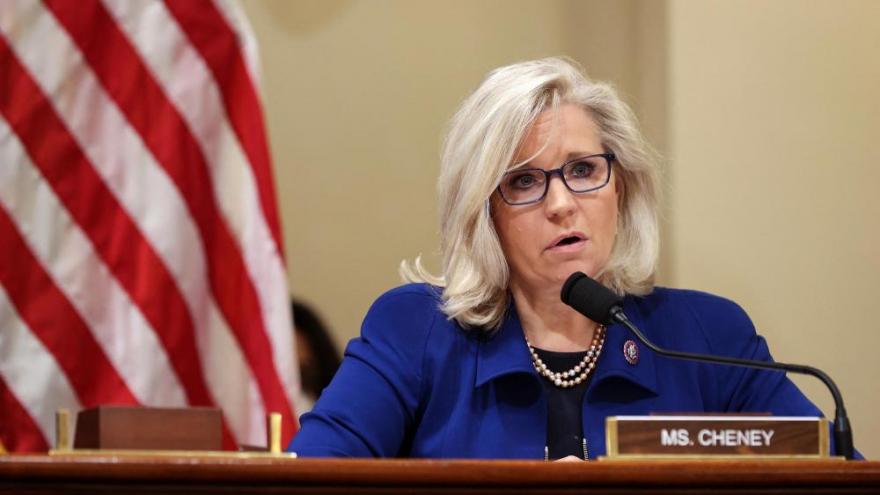 Liz Cheney, here delivering remarks on the US Capitol, is named vice chair of the January 6 select committee.

(CNN) -- Democratic Chairman of the January 6 Select Committee Bennie Thompson announced on Thursday that Republican Rep. Liz Cheney will become the panel's vice chair, the latest sign that the Democrat-run committee is attempting to strike a bipartisan tone as it prepares to wade into politically contested waters.

Cheney, one of two Republicans to serve on the committee, has defied her party by joining the panel controlled by Democrats and even sacrificed her own position in leadership in order to remain vocal and outspoken about the need to investigate the January 6 insurrection at the US Capitol.

Now stepping into a more prominent role within the select committee, the Wyoming congresswoman will be even more at odds with her party as the panel begins to chart its investigation and directly target Republicans who could have been affiliated with the deadly attack or key to piecing together what then-President Donald Trump knew before and during it.

The behind-the-scenes moves the committee has made in recent days has already gotten a rise out of many Republicans.

Earlier this week, CNN reported that the select committee had requested a group of telecommunications companies preserve the phone records of a group of GOP members of Congress and Trump, as well as members of the Trump family, who played some role in the "Stop the Steal" rally that served as the prelude to the Capitol insurrection.

The news sent shockwaves through the Republican conference, starting at the top with House Minority Leader Kevin McCarthy who argued without evidence that any telecommunication company that complied with the committee's request would be violating federal law.

Although McCarthy's name was not included in the preservation of records request list, he notably spoke to the former President during the height of the riot, and the contents of that call have continued to be of great interest. Thompson has repeatedly not ruled out calling McCarthy to testify in front of the committee if that is where the investigation leads.

Head of the conservative House Freedom Caucus, Rep. Andy Biggs, who is one of the lawmakers the select committee asked telecom companies to preserve the records of, is planning to send a letter to McCarthy this week calling on him to change the rules in order to remove Cheney and Rep. Adam Kinzinger of Illinois, the other Republican serving on the Committee, from the GOP Conference for their roles on the panel.

"We will not be deterred by threats or attempted obstruction and we will not rest until our task is complete," Cheney said in a statement accompanying her announcement, making an indirect nod to political fights to come.

"Every member of this committee is dedicated to conducting a non-partisan, professional, and thorough investigation of all the relevant facts regarding January 6th and the threat to our Constitution we faced that day. I have accepted the position of Vice-Chair of the committee to assure that we achieve that goal," Cheney added.

Targeting individual GOP lawmakers came just days after the select committee requested a massive tranche of documents from several US government agencies with a broad list of targets including communications and records within the Trump White House and campaign on and before January 6. The committee also recently sent letters to 15 social media companies, including Facebook, YouTube and Twitter, seeking to understand how misinformation and efforts to overturn the election by both foreign and domestic actors existed on their platforms.

"Representative Cheney has demonstrated again and again her commitment to getting answers about January 6th, ensuring accountability, and doing whatever it takes to protect democracy for the American people. Her leadership and insights have shaped the early work of the Select Committee and this appointment underscores the bipartisan nature of this effort," Thompson said of Cheney in a statement.

"We are fortunate to have a partner of such strength and courage, and I look forward to continuing our work together as we uncover the facts, tell the American people the full story of January 6th, and ensure that nothing like that day ever happens again," the chairman added.