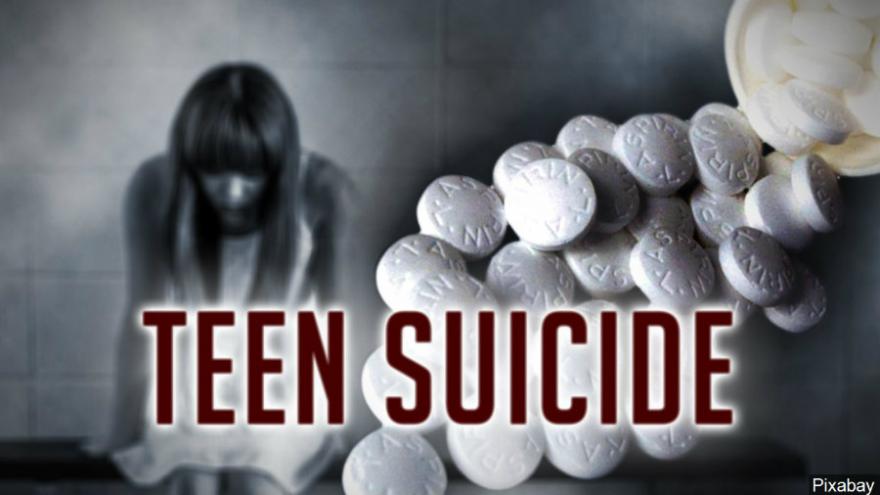 WEST CHESTER TOWNSHIP, Ohio (WCPO) -- The smell of Jet's Pizza greeted every hungry teenager who filed into a meeting at Lakota West High School just before lunch on Monday.

But it wasn't free food that lured the more than 40 students away from their classes and friends. It was the chance to help others by being part of the school's first-ever Hope Squad.

Started in Utah, the Hope Squad program uses the power of friendship to reduce teen suicides and improve school culture. It trains trusted students to become peer counselors who know how to be there for friends in need and lead classmates who are struggling to adults who can help them.

The Cincinnati nonprofit Grant Us Hope is working to bring Hope Squads to the Tri-State. Lakota West and Lakota East high schools are among the first schools to embrace the program.

WCPO explained the work of Grant Us Hope in a story earlier this year and sat in Monday as Greg Hudnall, the founder and CEO of Hope Squad, explained the program to Lakota West students and answered their questions.

"Suicide has increased every year since 1990," Hudnall told the students at the start of his presentation. "How many of you know someone who has been affected?"

Hands throughout the room shot into the air. Sadly, Hudnall was not surprised.

In nearly every presentation he makes to students, Hudnall said, most people in the room have been affected by suicide in some way. Seven out of 10 young people who die by suicide tell a friend or show warning signs to friends, he said, but those friends don't tell an adult that can help.

The Hope Squad program was designed to change that by making teams of caring students the eyes and ears of their schools. Teachers and administrators at each school survey students to figure out which of their classmates they would talk to and trust if they were having a problem. The names mentioned the most often get nominated to be part of the school's Hope Squad and then get extensive training for the work.

Alyssa Longworth said she couldn't wait to get started.

The power of 'a safe place'

Alyssa, a junior at Lakota East, said she lost a relative to suicide in January and also spent time with a friend of hers at the hospital after her friend attempted suicide. She has been anxious for the Hope Squad program to come to her school ever since, she said.

"I think it will make a huge difference to make sure everybody has a safe place to talk to someone," she said.

The Hope Squad program has grown to more than 300 schools in the U.S. and Canada over the past two decades and now has roughly 10,000 student members.

The very first high school in Utah to launch a Hope Squad hasn't had a suicide death in 15 years, Hudnall said.

No program can eliminate suicide completely, Hudnall said, but suicide is a preventable cause of death, and students who become part of Hope Squads learn how to spot the warning signs for peers who are having trouble.

Their first lesson will be in QPR, which stands for question, persuade and refer, a method that has been successful in helping convince people who are struggling to get help.

The Hope Squad members also will learn to set boundaries so they aren't staying up all night, every night talking on the phone with friends who are struggling.

The training spends time on bullying and how that factors into suicidal thoughts, too. And it also teaches about stages of grief, Hudnall said, so that Hope Squad members know what to expect if one of their peers dies by suicide.

Hudnall didn't pull any punches with the students at Lakota West. He told them there would be times, especially early on, where other students might make fun of Hope Squad or question what it's about. He said Hope Squad members must learn how to answer directly without being rude.

Most importantly, Hudnall said, the program isn't trying to change anyone who becomes part of a Hope Squad.

"We want you to be yourself," he said. "You were nominated because of who you are. We don't want you to change."

'We can always get better'

Students did have some questions for Hudnall. One girl asked about how the Hope Squad members could collaborate throughout the year. Hudnall said the group's weekly meetings would be the key to that.

A boy asked how they were supposed to approach students they didn't know. Hudnall said the Hope Squad members don't have to approach everyone if the situation is awkward for some reason. But they should report their concerns to the adult staff member who will be serving as the group's advisor.

Another girl asked: What if one of the Hope Squad members starts to feel depressed? That sometimes happens, Hudnall answered, and the Hope Squad is there to support and help its own members, too.

Lakota West Principal G. Elgin Card ended the meeting by applauding the students for their willingness to be part of the group and part of making a difference.

"You're going to see this thing flourish," Card said. "Think about how proud you're going to be about that. I think we've got a pretty good place now. But we can always get better."

Logan Grimes told WCPO he's anxious to learn more and get the training that Hudnall described.

Logan, a junior at Lakota West, said he has a cousin who died by suicide, and he is eager to get involved.

"I have confidence once I get the training and once I get through the whole program, I'll be able to go through it with ease," he said. "I feel it will help our school be more understanding."