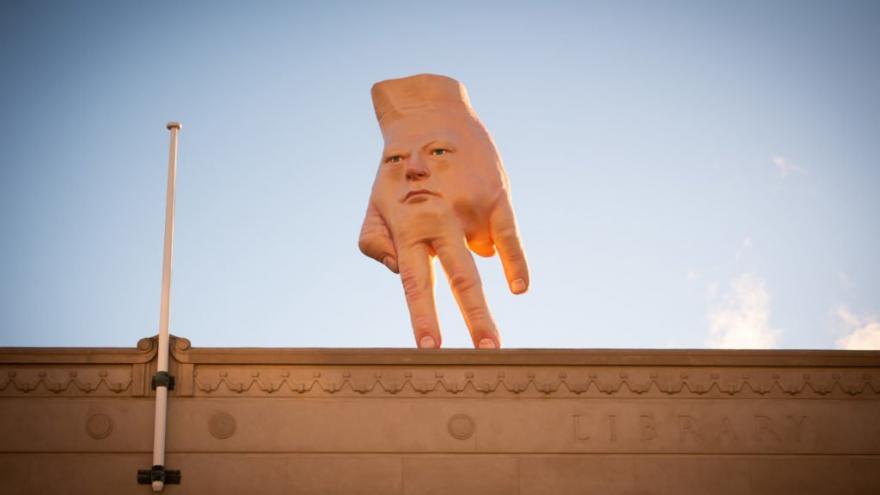 Created by New Zealand-born artist Ronnie van Hout, the sculpture, named \"Quasi,\" is described by the gallery as a \"hybrid face-hand\" and a \"partial self-portrait\" and is based on scans of the artist\'s own body parts. Source: City Gallery Wellington
By Amy Woodyatt

Residents of Wellington, New Zealand may have been unnerved to see the latest addition to their cityscape, as a massive hand was installed on the roof of the City Gallery Wellington, overlooking the capital's Civic Square, on Monday.

Created by New Zealand-born artist Ronnie van Hout, the sculpture, named "Quasi," is described by the gallery as a "hybrid face-hand" and a "partial self-portrait" and is based on scans of the artist's own body parts.

The statue's name also references Quasimodo, the protagonist of Victor Hugo's "The Hunchback of Notre-Dame."

"It's as if 'the hand of the artist' has developed a monstrous life of its own," City Gallery Wellington said on its website.

The statue, which was created in 2016 to sit atop the roof of the Christchurch Art Gallery following the 2011 earthquake in the city, was moved to Wellington on Monday.

"Is it a bird? Is it a plane? No—Quasi has landed! This morning, Ronnie van Hout's Quasi was installed on our roof. Quasi is a joint project with Wellington Sculpture Trust, with support from Wellington City Council, Wellington Community Trust, and Richard Burrell," the gallery tweeted to announce the statue's arrival.

Naturally, not everyone was as enthusiastic.

One Twitter user described "Quasi" as "the ugliest and most disturbing" piece of art she had ever seen, while another suggested the hand had not come in peace.

While in Christchurch, the statue proved quite controversial -- in 2016, local art critic Warren Feeney felt so strongly about it that he penned an article, "Ten reasons why Christchurch Art Gallery's Quasi must go."

In the article, the critic accused the statue of "inappropriately and belligerently" pointing at pedestrians on the street below.

The statue will continue its surveillance of Civic Square for three years.