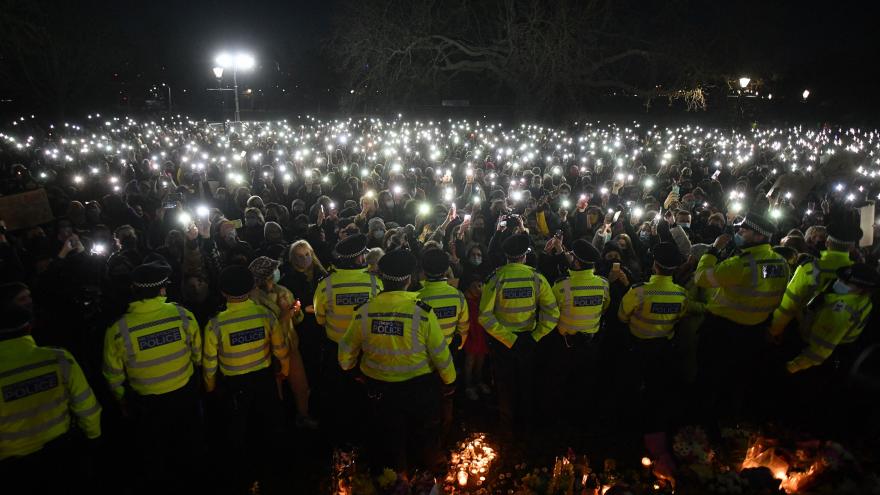 Police officers form a cordon as well-wishers turn on their phone torches as they gather at a band-stand where a planned vigil in honor of murder victim Sarah Everard was cancelled in London on March 13, 2021. - Justin Tallis/AFP/Getty Images

(CNN) -- Women's rights activists in the UK are reeling from the Metropolitan Police's heavy-handed approach at a Saturday night vigil for Sarah Everard, a 33-year old who was murdered while walking home in South London earlier this month.

The man who is accused of murdering her is a serving member of that same police force.

Throughout the day, mourners had flocked to the bandstand of Clapham Common, an area where Everard was last seen, in a tribute to her life. But they also came in an act of solidarity, as an acknowledgement of the shared, omnipresent experience of intimidation, violence and harassment that women constantly face in public spaces.

A series of evening vigils from organizers "Reclaim These Streets" had been planned Saturday across the UK. The main event, at Clapham Common, was cancelled after the Met said they couldn't go ahead, citing coronavirus restrictions. The organizers asked people to shine a light on their doorstep instead for Everard and for all women affected by and lost to violence.

But by nightfall, peaceful mourners gathered for the socially distanced event in Clapham. Attendees chanted: "This is a vigil, we do not need your services."

Less than an hour after the gathering began, officers moved in to inform people that they were breaching Covid-19 regulations and had to leave. Then, a predominantly male cluster of officers moved in, using containment and corralling techniques -- where officers surround demonstrators to keep them in a particular place, making social-distancing impossible -- ordering people to leave, or face arrest and fines.

As police officers forcibly removed women from the bandstand and dropped others face down to the floor in arrest, attendees chanted "Shame on you," "Arrest your own," and "Who do you protect?"

In a statement on Sunday morning, the Met Police said they "absolutely did not want to be in a position where enforcement action was necessary," but that "we were placed in this position because of the overriding need to protect people's safety."

Home Office minister Victoria Atkins addressed a now-viral photograph of one of the women who had been pinned down by police officers during an interview on Sky News on Sunday morning, saying it is "something that the police will have to explain in that report to the Home Secretary."

Atkins added that the "very upsetting scenes" were being "taken very seriously" by the British government.

Her comments come as videos on social media and news agencies continue to surface, showing attendees scuffling with police.

Several UK leaders across party divides have agreed that the police response was disproportionately harsh.

London Mayor Sadiq Khan said on Twitter that "The scenes from Clapham Common are unacceptable. The police have a responsibility to enforce Covid laws but from images I've seen it's clear the response was at times neither appropriate nor proportionate," adding that he was in contact with the Commissioner and "urgently seeking an explanation."

"Women came together to mourn Sarah Everard -- they should have been able to do so peacefully," he said, adding that he shared their "anger and upset at how this has been handled."

"This was not the way to police this protest," Starmer said.

UK Home Secretary Priti Patel said that "some" of the footage that was circulating online was "upsetting" and said she had asked the Met for a "full report on what happened."

Patels' comments, however, are unfolding in a landscape that's become increasingly hostile to dissenting voices -- one that disproportionately affects marginalized communities, including women.

The Home Secretary has made no bones about her plans to crack down on dissent, calling environmental protesters "eco-crusaders turned criminals" intent on attacking a British way of life and labeling the tactics of the Black Lives Matter demonstrators as "thuggery" in two different speeches last fall.

And while Patel has said the government will always "defend the right to protest," her actions suggest otherwise.

Critics of the Police, Crime, Sentencing and Courts Bill 2021, which was introduced by Patel last week, say that the new law is intent on squashing the peaceful right to protest.

It's a move that activists say underlines the government's often-preferred solution of beefing up police funding and presence on the ground -- when police have repeatedly abused the powers they already have, exemplified in the response to Everard's vigil.

Patsy Stevenson, who was pinned down by Met officers on Saturday evening, has urged the public to shift the narrative away from the police and back to what happened to Everard, calling on the public to show their support on March 15 at London's Parliament Square. Others have called for a Sunday vigil.

Meanwhile, the government has been undertaking an "end-to-end" review of the criminal justice system, according to Atkins, including changes to the sentencing of serious and violent offenders.

The minister called the Domestic Abuse Bill "a landmark piece of legislation," that will start a "conversation about abusive behavior and what we can do to support victims, but also to tackle perpetrators," she said, adding that the government was investing "unprecedented amounts of money" into perpetrator programs as well.

But Jess Phillips, the UK Shadow Home Office Minister said that government must "turn their rhetoric into action," noting that the bill mentions statues more than women.

Over 70% of women surveyed by a new poll from UN Women UK said they had experienced sexual harassment in public spaces. That figure rose to 97% among women aged 18 to 24, polling showed. The data, released Wednesday, was drawn from a YouGov survey of more than 1,000 women commissioned by UN Women UK in January 2021.

The organization's polling also suggested women have little faith in public institutions to tackle the situation.

"Only 4% of women told us they reported the incidents of harassment to an official organization -- with 45% of women saying they didn't believe reporting would help change anything," UN Women UK said.

Murder suspect and police officer Wayne Couzens, 48, appeared at Westminster Magistrates Court in London on Saturday for his first hearing. He has been remanded in custody and will next appear in court at the Old Bailey in London on March 16, according to Met Police.