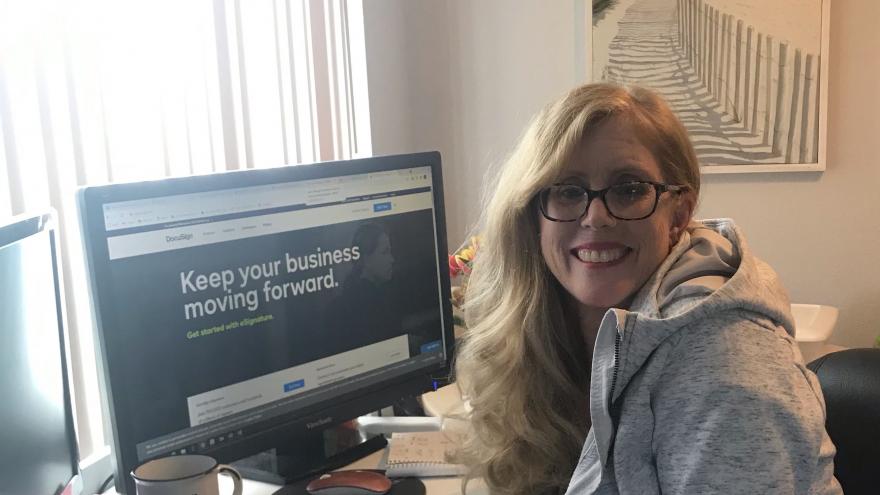 Shanan Cale at her home workspace in California, where she\'ll continue to work most days after the pandemic. - Courtesy Shanan Cale

(CNN) -- When the world goes back to normal, Shanan Cale's life won't change much.

She'll still work mostly from her home in California. She'll mother her two college-aged daughters. And she'll continue to ponder intimacy and connection as a 54-year-old woman experiencing loneliness.

"Post-pandemic, even now that I'm vaccinated and everyone in my household is vaccinated -- I don't really have people outside my little pod," she told CNN.

Cale is lonely but not alone.

In 2018, nearly half of Americans reported sometimes or always feeling alone. Recent findings suggest that during the pandemic, over one in three Americans face "serious loneliness."

The "loneliness epidemic," as some experts call it, was a problem well before Covid-19. And while physical reunion is now in sight, it'll take more than dinner parties to reach the marrow of a complicated and deeply cultural problem.

Loneliness is nuanced, and different for everyone

There is a distinction between loneliness and the social isolation that Covid-19 has required over the past year.

While isolation is more quantitative and objective -- the reality of fewer social contacts -- loneliness is a feeling.

"Loneliness is thought to be more of a subjective, distressing feeling," Julianne Holt-Lunstad, a professor of psychology and neuroscience at Brigham Young University, told CNN. "It's often defined as the discrepancy between one's actual and desired level of connection."

And because loneliness is a feeling, it varies widely.

It can begin at home, in the workplace or at school. Seniors may experience it differently than young people, and it's influenced by how marginalized people may feel where they live and work.

For Cale, it was brought on -- rather suddenly -- by circumstances.

After a divorce five years ago, she found that the communities she had come to depend on quickly vanished.

"People that I had been around for 10 years, it was like there was no reaching out. There was no, 'What's going on? How can I help you?'" she said. "It showed a lack of depth, even though we had shared pretty intimate things."

This "lack" defines how Cale views her own bout of loneliness.

"I would describe it as a lack of intimacy. Being known," she said. "You have acquaintances, which [means] 'Hi, how you doing?' chit-chat, versus being really seen and heard."

Whether people who are lonely have too few relationships or not enough deep bonds with others, loneliness has dire health outcomes across the board.

In fact, loneliness is just as lethal as smoking up to 15 cigarettes a day, she revealed. And people with strong social bonds are 50 percent less likely to die over a given period of time than those with fewer social connections.

"We need to recognize that this is a health issue," Holt-Lunstad said. "It isn't just about our emotional well-being ... it's also medical."

But we don't need another epidemic

Some are pushing back on the medicalization of loneliness, and the language of "epidemic" that follows it.

Fay Bound Alberti, a cultural historian and UK Research and Innovation Future Fellow at the University of York, wrote a book called "A Biography of Loneliness," which traces the history of loneliness as a modern, socio-cultural phenomenon.

She said using medical language for loneliness can uproot it from its historical and social contexts.

"It's become this epidemic to be frightened of," she told CNN. "It's articulated as something we can't control, when we know that there are actually social reasons people feel lonely."

Alberti said that hyper-medicalizing loneliness could lead to knee-jerk, one-size-fits-all solutions, which could do more harm than good.

The causes of loneliness, according to Alberti, can be linked to an individualism common in Western cultures that arose with secularism and industrialization in the 19th century.

It's a complex, social history, she said -- with biological consequences.

For that reason, it requires a myriad of solutions.

Post-pandemic, we need to work together against loneliness

It's not clear what effect the pandemic has had on the loneliness problem in the US.

Holt-Lunstad said several studies have been done to measure the effects of the past year's social isolation on loneliness, with mixed results.

It's safe to say, though, that loneliness levels have stabilized at best and risen dramatically at worst.

As we begin to transition out of the pandemic, Holt-Lunstad said she'd like to see more attention to loneliness in healthcare settings, along with cross-sector policies to address and implement strategies against it.

Others, like Alberti, are focusing on the social roots of loneliness, advocating for collective activity and initiatives that create meaning for people and which "turn back the dial" on individualistic living.

Alberti said the early days of the pandemic, when mutual support was "spontaneous," could model this.

Some, though, are trying to combine the medical with the emotional.

The UnLonely Project, an initiative of the Foundation for Art & Healing, is one such organization.

The Foundation's founder, Dr. Jeremy Nobel, said the project is intended to increase awareness of loneliness and its health risks, reduce the stigma around loneliness and implement arts programs for connection and healing.

"It's using the art as a way to communicate your personal experience in a way that allows you to be seen," he said. "When they share back, you see that connection through the sharing of story, is ... creating a shared vision of how we can be together."

The UnLonely Project facilitates connection through in-person "creativity circles," a virtual creative expression program and an annual short film festival, among other initiatives.

Cale says that, for her, managing loneliness in a post-pandemic world will simply take time and effort.

"When people talk about (reuniting), it makes me realize, 'How am I going to, once again, try to start over?'" she said.

But Cale said she is a "joiner" -- someone who naturally seeks out volunteer opportunities and community activities. And this is helping.

While there are many ways to fill that void, experts agree on something: It starts with talking about it.

Tempering our talk of reunion with vulnerability about loneliness could ensure that as we emerge from a pandemic, we emerge together.