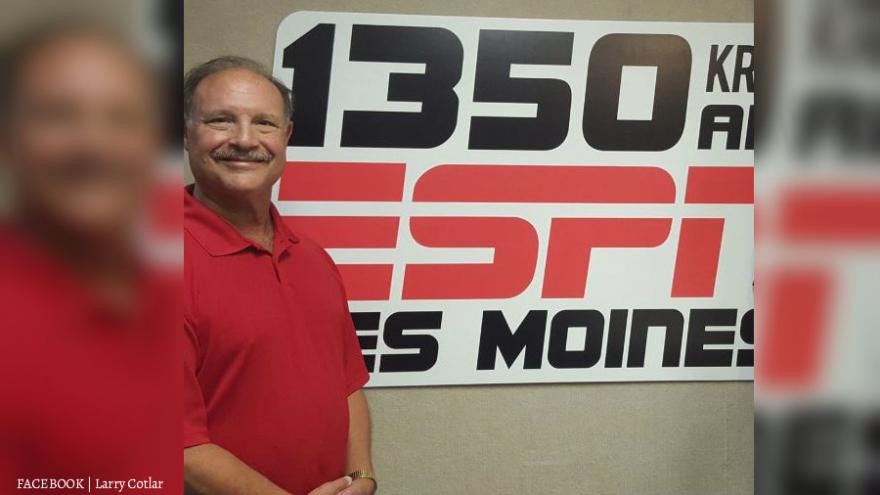 DES MOINES, Iowa (AP) — A longtime Iowa sportscaster has died in flash flooding in Des Moines amid heavy rain that forced the evacuation of some homes and businesses in one suburb.

Police said 66-year-old Larry Cotlar died Saturday when he was swept away in floodwater after his van stalled on a flooded north Des Moines street. Cotlar had worked as the voice of Drake University's teams since 2005.

Drake athletics director Brian Hardin said he respected Cotlar's work and who he was.

"We all had the utmost respect — not just for Larry's talent, but for the kind of quality person and colleague he was. Larry was loyal, passionate and tireless," Hardin said.

Witnesses told police Cotlar was swept away as he got out of his stalled van. His body was found nearly four hours later, several blocks away.

The flooding was fueled by 3 to 8 inches (7.5 to 20 centimeters) of rain that fell across the Des Moines area Saturday night. Homes and businesses along Walnut Creek in the suburb of Clive had to be evacuated. Some streets remained blocked Sunday.

"The speed and how long that rain fell caught us by surprise," Des Moines police Sgt. Paul Parizek said.

In the suburb of Urbandale, residents of a duplex escaped shortly before an explosion from a ruptured gas line leveled their home after the basement flooded.

"It flushed me and my wife to the point we thought we were gone. We managed to get to the ceiling and get air," Shane Rhoades told The Des Moines Register. "My wife found a window over here and we swam out, got our three children out."

The area is getting some relief. The National Weather Service predicts that Thursday will be the next chance for rain. But rivers and reservoirs in the area are already full and may continue rising in the days ahead.

The Army Corps of Engineers predicts that the reservoir that protects Des Moines from Des Moines River flooding will crest next weekend at a level above the lip of the concrete emergency spillway. Des Moines Mayor Frank Cownie said the city doesn't expect any uncontrolled flood releases from the reservoir.