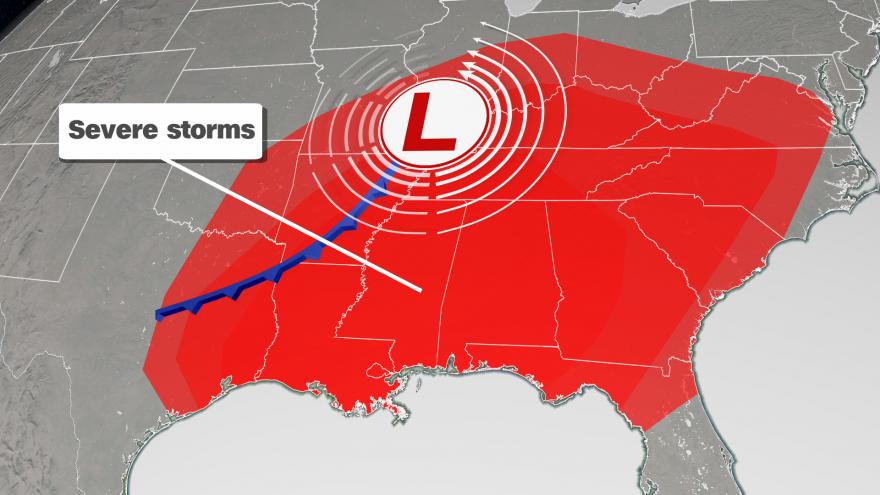 (CNN) -- As Americans celebrate Easter and Passover this weekend, many will have to contend with snow, hail and tornadoes.

A large storm system will bring severe weather to much of the Southeast on Saturday and Sunday.

"This is a classic springtime set-up," said CNN meteorologist Brandon Miller. "Where a strong storm system is forming along the boundary between the last gasp of winter pushing down from Canada meeting warmer a more humid air from the Gulf of Mexico.

Get your local forecast for the weekend >>>

"Ultimately, the cold will win out," he said, "bringing temperatures 20-30 degrees below normal for much of the central US by the start of the workweek, but not before sparking off what could be dozens of damaging tornadoes and strong thunderstorms."

The severe storms will begin on Saturday across areas of Texas, Louisiana and Oklahoma, where the main threats will be damaging winds, large hail and a few tornadoes.

The storm threat increases on Sunday

By Sunday, the storm system is expected to intensify as it moves eastward.

Over 90 million people in nearly 20 states are at risk for severe weather on Sunday into Monday morning.

Track the storms with the CNN storm tracker >>>
The biggest threat will be damaging winds. Large hail, the size of tennis balls, is also likely.

But tornadoes are also in the forecast.

They have the potential to be large, long-track tornadoes. Meaning they could be on the ground for a considerable amount of time.

"Many significant tornado outbreaks are historically associated with the holidays that they happened to fall on, such as Palm Sunday in 1965, Super Tuesday 2008, and it certainly looks like Easter 2020 could be remembered as one of those infamous outbreaks," Miller said.

Meteorologists warn that after a storm passes, residents shouldn't let their guards down.

"For Georgia, we're expecting two possible waves of activity: the first will be in the afternoon on Sunday as a warm front moves through the area," said Kyle Thiem, a meteorologist at the National Weather Service office in Atlanta. "The second wave of storms will likely come through overnight as the main system moves eastward."

Nocturnal tornadoes are common in the South and can be more deadly because people are sleeping.

Flash flooding is also expected in some mid-South states, such as Tennessee, North Carolina and portions of northern Georgia and Alabama, where rainfall totals could exceed 5 to 6 inches.

Most other areas will receive a total of 2 to 4 inches.

To stay abreast of dangerous conditions, officials advise residents to have multiple methods of receiving severe weather alerts, including weather radio and smart phone apps. For apps, make sure they're not on "do not disturb" or "silent" mode.

Four tornado safety tips that could save your life >>>

In the event of a tornado, sirens will likely sound. However, they're not intended to wake people up; they're meant to alert people who are outdoors that they need to go inside as quickly as possible.