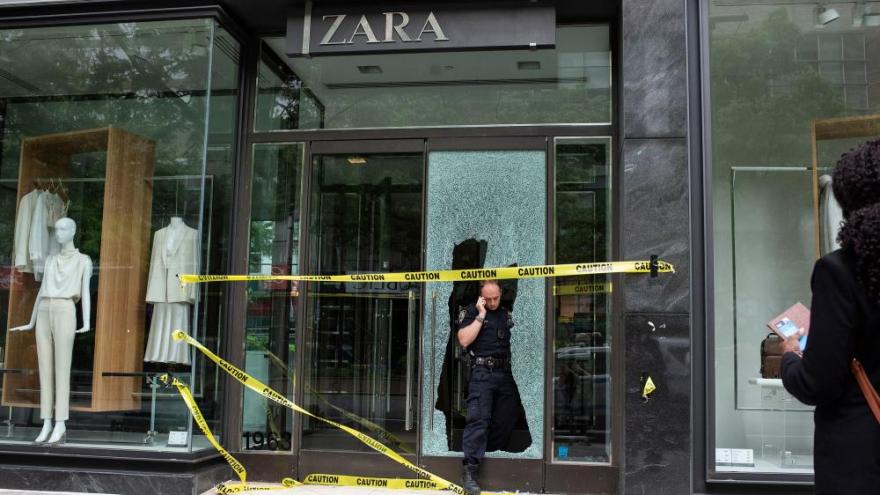 A police officer leaves a Zara store that was looted the night before on June 1 in New York City.

(CNN) -- Looters in New York City were able to tear through some of the most expensive, high-end stores in the city because of an intelligence failure, according to a high-ranking police official.

The coordinated effort of looters to target the Manhattan neighborhood of SoHo without the police department's knowledge points to something the NYPD missed, said John Miller, the NYPD's chief of counterterrorism and intelligence.

"On the looting, that's an intelligence failure," Miller said at a briefing on Saturday. "If a couple of hundred people knew to be in a certain place at a certain time for criminal activity and we didn't detect that, that's on me. We've gone back looking for 'where was the Facebook page, where was the chatter in the places where we monitor gang's social media' and we still haven't seen it."

In midtown Manhattan, there was widespread looting along the neighborhood's eastern portion, including the high-end shopping district of Fifth Avenue and Madison Avenue close to Trump Tower.

The looting extended further south into Herald Square, where looters were even able to penetrate the iconic Macy's building, with officers dragging looters out of the store late into the night.

Fires were set, including some police vehicles, and buildings were vandalized with graffiti tags or simply had their windows smashed.

In an exclusive interview with CNN, NYPD Chief of Patrol Fausto Pichardo said that more than 50 commercial establishments in SoHo were burglarized. One car seized by the NYPD had more than $17,000 worth of products inside, said Pichardo, who oversees the majority of the department's uniformed officers.

"The first night was complete chaos," Pichardo said. "People walking past us with laundry bags full of things, four or five sneaker boxes. There was definitely organization, lots of cars here. A lot of people with a lot of bags."

The looting added another dimension to demonstrations that were sparked after George Floyd was killed in Minnesota.

So far, the NYPD has made 1,049 arrests as of Saturday morning, Miller said. More than 70% of the arrests were made in Manhattan and only a small number of those arrested, 119, were from outside of New York City, according to the NYPD.

The demonstrations and violence have reverberated among the NYPD's rank and file. There have been 292 police officers injured while two officers were suspended without pay because of their actions during the protests. A supervisor was reassigned, the NYPD said.

Miller said the questions surrounding the intelligence failure only applies for the first night since after that new measures were immediately put into place to quell the chaos, including an 8 p.m. curfew, no traffic south of 96th Street, and no protesters allowed onto bridges past the 8 p.m. curfew, according to police.

"The looting was not a feature we anticipated, nor is it one we've seen before associated with these kinds of movements, nor do we actually believe that it's associated with this movement," Miller said. "We believe it was an opportunist action by regular criminal groups who decided to exploit this. And we hear that increasingly from the groups that are marching that they have nothing to do with that and are trying to disassociate themselves."

NYPD officials say they have differentiated between peaceful protesters, anarchist groups and looters when they all appear to be part of the same crowd but are not together. Miller highlighted that protesters have been disassociating themselves from both anarchists and looters.

At a George Floyd rally in Brooklyn on Wednesday, Miller said protesters alerted police to a vehicle with out-of-state license plates where the occupants inside wielded a knife and yelled at police before they were stopped. Inside the car was an accelerant for fires, other weapons and gas masks, police said.

"Looters break the windows and they were never interested in marching in the first place," Miller said. "They want to go in and get merch. And what did they hit? They're hitting the Coach store, they're hitting the high-end boutiques. The anarchists will break the window of a bank because that symbolizes capitalism, imperialism, all that stuff that factors into the rhetoric."