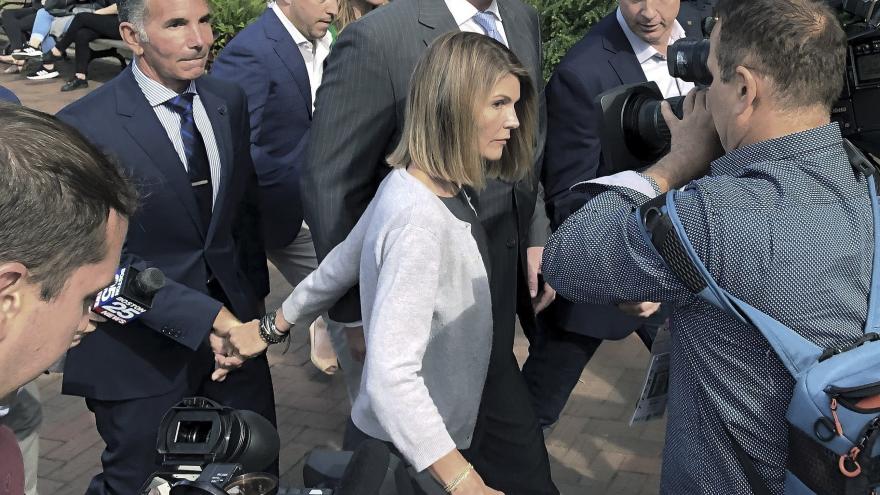 (CNN) -- Actress Lori Loughlin and her husband Mossimo Giannulli calmly walked into federal court in Boston on Tuesday afternoon for a hearing related to the college admissions scam.

Loughlin, wearing a dark gray dress and light gray cardigan, held hands with Giannulli as they entered and, later, left court. That arrival was a contrast from Loughlin's court appearance in April, when she was met with some fans and admirers screaming "Aunt Becky!" outside Boston federal court.

Loughlin and Giannulli, a fashion designer, are accused of paying $500,000 to a fake charity to get their two daughters accepted into the University of Southern California, falsely designating them as crew team recruits.

The hearing addressed potential conflicts of interest regarding their attorneys in the case. Both Loughlin and Giannulli have chosen to be jointly represented by attorneys from the firm Latham & Watkins, which could potentially threaten their case should any conflicts arise between the two.

Different attorneys from Latham & Watkins have previously represented USC in an unrelated real-estate case, but those representing the couple maintain that this has not, and will not, affect their case. The law firm has created an "ethical wall" between the cases, prohibiting the attorneys and staff working on Loughlin and Giannulli's case from discussing it with those who worked on the USC matter, according to court documents.

Additional attorneys representing the couple are also from law firms whose clientele include other defendants in the larger college admissions scam, all allegedly connected to college admissions prep company CEO William "Rick" Singer. Loughlin and Giannulli will be asked whether they feel any of these factors could result in conflicts of interest.

On Tuesday, Loughlin and Giannulli answered several routine questions from the judge, and said they do not feel any of these factors could result in conflicts of interest. Their attorneys would not comment after the hearing.

Loughlin played the role of Rebecca "Becky" Katsopolis in the TV sitcom "Full House" for seven years and reprised the role in the affiliated reboot "Fuller House" beginning in 2016.

Their daughters, Isabella and Olivia, were recruited as coxswains at USC, though they did not row competitively or otherwise participate in crew, according to their criminal complaint. The parents even sent Singer photos of each daughter on an ergometer, the rowing machine, the complaint says.

Brands have distanced themselves from Loughlin and daughter Olivia in the wake of the scandal. The Hallmark Channel severed ties with Loughlin in March, shortly after the charges were made public.

Two high-level crisis management executives told CNN in May that they were approached by the couple to help improve their public image following news of their involvement in the college admissions scam.