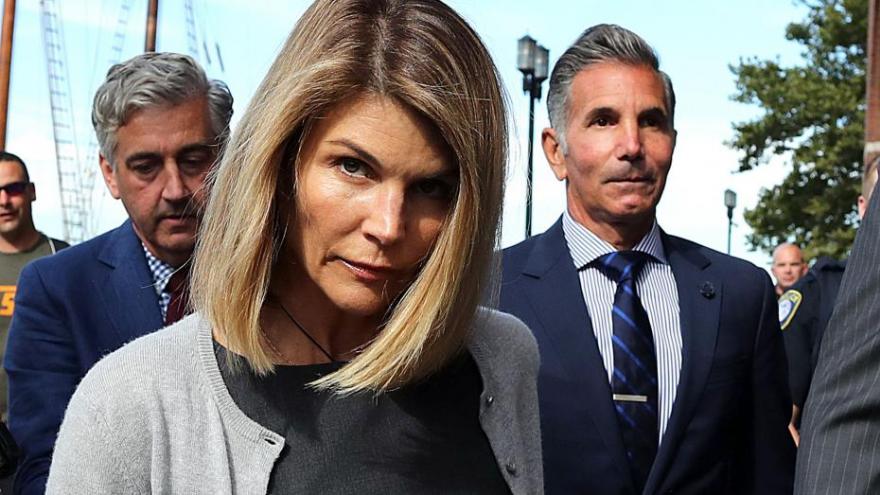 Lori Loughlin, the famed actress who became the face of the college admissions scandal, is expected to be sentenced to prison on Aug. 21, 2020, a fate she and her husband, Mossimo Giannulli, fought to avoid from the moment they were charged by federal authorities.

(CNN) -- Actress Lori Loughlin was sentenced Friday to two months in federal prison for her role in the college admissions scandal, a fate she and her husband, Mossimo Giannulli, initially tried to avoid after they were charged.

Loughlin also will serve two years of supervised release during which she must perform 100 hours of community service and pay a fine of $150,000, according to the US Attorney for the District of Massachusetts. She was sentenced just hours after Giannulli, who received five months in prison, a $250,000 fine, two years of supervised release and 250 hours of community service. Both must surrender to the US Bureau of Prisons before 2 p.m. on November 19.

The sentencing brings an end to the saga for Giannulli and Loughlin, who became the face of the college admissions scandal, and are arguably the parents with the highest profile who admitted to paying the scheme's mastermind, William Rick Singer, $500,000 to get their daughters into the University of Southern California.

"I went along with a plan to give my daughters an unfair advantage in the college admissions process," Loughlin said during her virtual sentencing hearing. "In doing so I ignored my intuition and allowed myself to be swayed from my moral compass. I thought I was acting out of love for my children. But in reality, it only undermined and diminished my daughters' abilities and accomplishments."

She said she now understood that her decision helped exacerbate existing inequalities in society.

An insurance executive who introduced Loughlin to Singer has agreed to plead guilty to federal charges for paying a man to help his daughter cheat on the ACT, as part of the case, federal prosecutors said.

Mark Hauser, 59, of Los Angeles, will enter a guilty plea to one count of conspiracy to commit mail fraud and one count of honest services mail fraud, a news release from the US Attorney's Office for the District of Massachusetts said Friday. Prosecutors are recommending a sentence of six months in prison, one year of supervised release, a fine of $40,000

Hauser is the 56th parent to be charged in the case. A plea hearing will be scheduled at a later date.

Rob Fisher, an attorney for Hauser, said his client had no role with the Giannulli investigation and is not a cooperator for the government.

Loughlin, best known for her portrayal of Aunt Becky on the sitcom "Full House," and Giannulli, a fashion designer, pleaded guilty to conspiracy charges, taking advantage of what Singer referred to as his "side door" into the university by creating fake profiles for the girls and passing them off as recruits on the crew team.

"I deeply regret the harm that my actions have caused my daughters, my wife and others," Giannulli said during his virtual sentencing hearing. "I take full responsibility for my conduct. I'm ready to accept the consequences and move forward with the lessons I've learned from this experience."

During the hearings Friday, US District Judge Nathaniel Gorton addressed both defendants, telling Loughlin that he believed her statement was sincere, but pointed to what he described as her "fairy-tale life."

"Yet you stand before me a convicted felon, and for what? For the inexplicable desire to grab more," Gorton said. "To have whatever prestige and instant gratification that comes from being able to show off the admission of your daughters to a preferred university."

Earlier in the day, Gorton told Giannulli that he "certainly did know better."

"You were not stealing bread to feed your family," Gorton said. "You have no excuse for your crime. And that makes it all the more blameworthy."

Loughlin had less active role in scheme, US Attorney says

Federal prosecutors on Tuesday formally asked for the sentences for Loughlin and Giannulli. Prosecutors wrote that the evidence suggests Giannulli was the more active participant, while Loughlin took a less active role but was "fully complicit."

"He engaged more frequently with Singer, directed the bribe payments to USC and Singer, and personally confronted his daughter's high school counselor to prevent the scheme from being discovered, brazenly lying about his daughter's athletic abilities," wrote US Attorney Andrew Lelling of Massachusetts in the detention memo released on Tuesday.

"Loughlin took a less active role, but was nonetheless fully complicit, eagerly enlisting Singer a second time for her younger daughter, and coaching her daughter not to 'say too much' to her high school's legitimate college counselor, lest he catch on to their fraud."

Because of the type of plea agreement that Loughlin, Giannulli and prosecutors entered into, the judge had little wiggle room to veer off the agreed-upon deal.

"The case went south on the prosecutors," said CNN legal analyst Elie Honig, who referenced exculpatory evidence that Loughlin's defense attorneys argued proved that she and Giannulli thought they were donating to a legitimate business. "Those documents were potentially devastating to the prosecution's case and massively reduced the prosecutors' chance at getting a conviction at trial."

Word of the evidence came to light in December, when Loughlin and Giannulli's attorneys argued that iPhone notes from Singer's mobile device allege that FBI agents spoke aggressively to him about his recorded calls with defendants, and they alleged investigatory misconduct. They also argued that prosecutors had not handed over this evidence quickly enough, only eight months before an October trial, and that they did not have enough time to prepare.

Couple could have faced up to 20 years in prison

Gorton denied a motion to dismiss the charges and said the evidence could be debated at trial. Gorton also wrote in his decision that the defense had enough time and that the failure to turn over the notes was "irresponsible" and "misguided" not "willful," because of prosecutors "imprudent underestimation of the context, relevance and potential exculpatory nature of the notes."

Still, the exculpatory evidence opened the door for a good deal for Loughlin and Giannulli, Honig said.

"There's always a risk of going to trial. If she had gone to trial and been convicted, she would have gotten slammed sentencing wise," the legal analyst said. "It's a deal that I think makes sense both ways but reflects the fact that the prosecutor's case really took an unexpected turn."

So far, 55 defendants have been charged in connection with the college admissions scandal, and of those, 41 have either pleaded guilty or agreed to plead guilty, according to the US Attorney's Office. Of those, 28 parents, including Loughlin and Giannulli, initially pleaded not guilty. Twenty parents have been sentenced, while 13 others, including coaches, administrators, members of Singer's group and Mark Riddell, the expert test taker, have pleaded guilty or agreed to plead guilty.

Actress Felicity Huffman, the other high-profile parent to be charged in the crime scheme, pleaded guilty and spent 11 days in jail. She was released in October and has not spoken publicly about the incident.

Huffman, who accepted responsibility from the onset, was sentenced by US District Judge Indira Talwani, who is also regarded as more lenient in her sentencing, according to courtroom insiders.

Loughlin and Giannulli entered into what is known in the federal system as a "C Plea." The plea takes away the judge's power to deviate from the terms that have already been agreed upon. If Gorton, known for being tough with sentencing, accepts the plea in court, which he's expected to do, then he also agrees to accept the "C Plea."

"He's one of the heavier sentencers," Fisher said.

If Loughlin and Giannulli had gone to trial and been convicted, they could have faced up to 20 years in prison for the conspiracy charge, prosecutors said.

"With her guidelines, she could have been looking at significantly more time after trial," Fisher said. "Two months is going to be a significant deviation from the original sentencing guidelines."