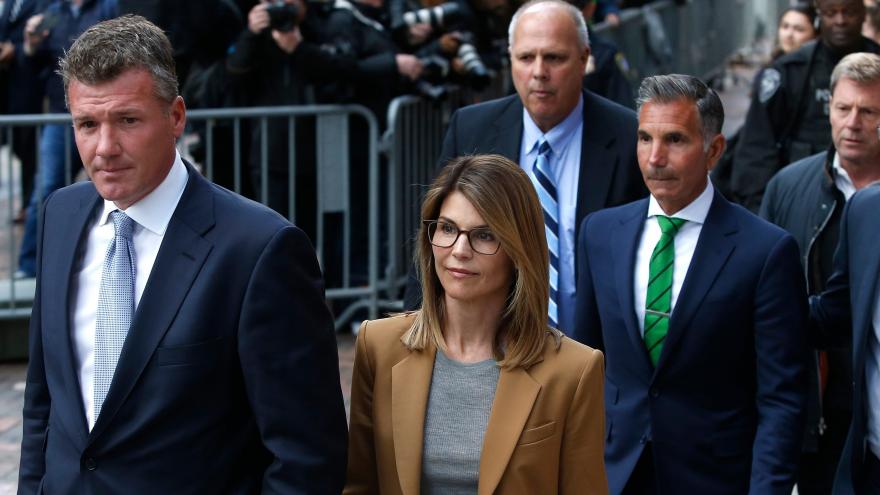 (CNN) -- Lori Loughlin has hit "rock bottom," according to a long-time friend of the actress.

The most recent blow came when Loughlin and her husband Mossimo Giannulli, along with nine other accused parents in the college admissions scandal were hit last week with an additional bribery charge.

"She's at rock bottom, devastated," the source tells CNN. "She knows she could go away for a long time and it's terrifying for her."

The new charge accuses Loughlin and Giannulli of bribing University of Southern California employees to get their daughters admitted to the school. In exchange for the bribes, USC coaches and athletics officials allegedly designated the children as recruited athletes, easing their admission, regardless of their athletic ability, prosecutors said.

The charge of federal programs bribery is defined as a bribe of anything valued of at least $5,000 at an organization that receives more than $10,000 from the federal government, which would include USC and other universities implicated in the alleged scam.

Loughlin and her husband previously pleaded not guilty in April to charges of conspiracy to commit fraud and conspiracy to commit money laundering. Prosecutors say she and Giannulli paid $500,000 to a fake charity to get their two daughters accepted into the University of Southern California, falsely designating them as crew recruits. They face a maximum of up to 45 years in prison for the charges.

When asked by CNN how her marriage has been affected by this scandal the source said it's "beyond strained."

"All she wanted was the best for her daughters and she wishes people would see that," the source added. "She definitely regrets the way she's handled herself since all this came out."

The source noted that Loughlin and her daughters are "closer than ever."

CNN has contacted a representative for Loughlin for comment.

Loughlin awaits trial for the charges for which she has already pleaded not guilty. The next court date in the case is scheduled for Nov. 20.

CNN's Eric Levenson and Melanie Schuman contributed to this story.