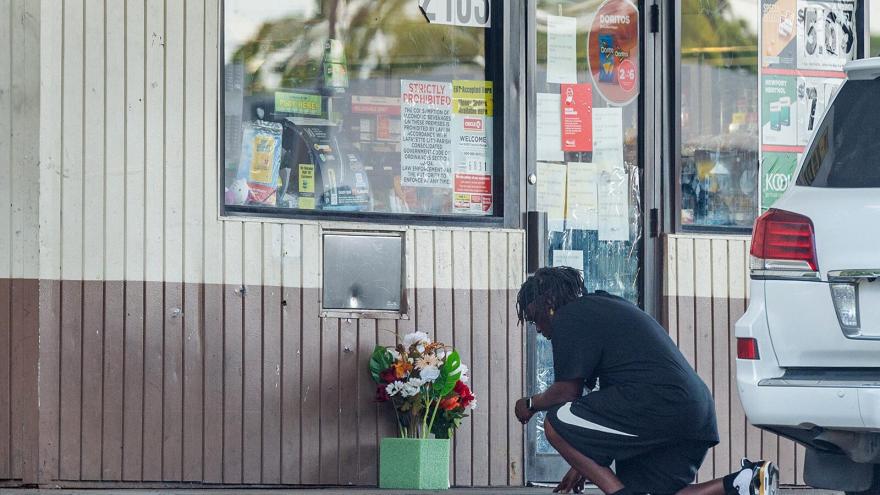 A man kneels to say a prayer outside convenience store where a man was shot and killed by Lafayette Police on Aug. 22, 2020.

(CNN) -- Louisiana State Police are investigating the death of Trayford Pellerin, a 31-year-old Black man who was fatally shot Friday night during an encounter with officers from the Lafayette Police Department.

Officers were called to a Lafayette convenience store shortly after 8 p.m. Friday to respond to a "disturbance involving a person armed with a knife," according to a statement from the Louisiana State Police.

The officers shot Pellerin as he tried to enter a convenience store along NW Evangeline Thruway, according to Louisiana State Police. Pellerin was taken to a hospital where he was pronounced dead.

State police said no officers were injured and that the investigation is "active and ongoing." No further information was available.

Pellerin's death comes near the end of a summer that has seen widespread protests and outrage over racial injustice and police brutality following the police killings of Black people like George Floyd in Minneapolis and Breonna Taylor in Louisville, Kentucky.

Civil rights attorney Benjamin Crump said in a statement sent to CNN that he was among the lawyers representing Pellerin's family. Crump called for the officers involved to be fired.

"We refuse to let this case resolve like so many others: quietly and without answers and justice," said Crump, who also represents the families of Floyd and Taylor.

"The family, and the people of Lafayette, deserve honesty and accountability from those who are sworn to protect them -- the Lafayette police," he added.