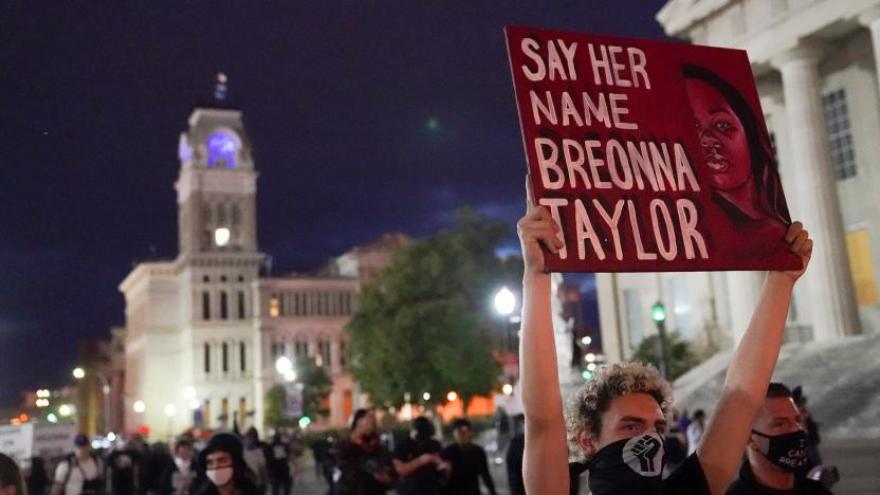 Saturday marked the fourth night of demonstrations in Louisville since the attorney general announced that no officers are being charged directly in the killing of Breonna Taylor. Louisville Mayor Greg Fischer said the protests have been largely peaceful.

On Saturday, a small group of protesters caused destruction when they set plywood shields on fire in the street in front of the First Unitarian Church, where a larger group of protesters gathered when the citywide curfew went into effect at 9 p.m., said the Louisville Metro Police Department (LMPD) in a series of tweets.

The violence began just before midnight when windows at Presentation Academy and Spalding University were smashed and several buildings were sprayed with graffiti. Small explosions were sparked when a car in the Spalding parking lot was set on fire with fireworks inside.

Both the police and the fire department responded to put the car fire out.

Aerial video taken from a LMPD helicopter and released on Twitter showed a fire burning in the street near the church. Police also released videos showing shattered glass doors and a heavily damaged light sign just off the street.

The protesters who gathered inside the church were asked to remain there while police investigated and secured the area.

Police made several arrests following the car fire incident and said they arrested at least 28 individuals in all on Saturday night.

On Thursday, among two dozen people arrested during the demonstrations was Kentucky state Rep. Attica Scott, the state's only Black female legislator.