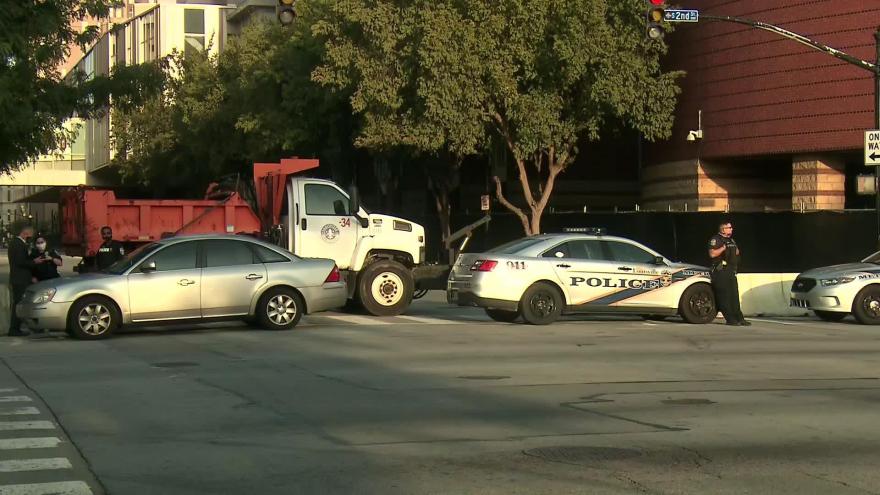 (CNN) -- Authorities in Louisville, Kentucky, are restricting access to its downtown area and setting up vehicle barricades ahead of a grand jury's coming decision in the fatal police shooting of Breonna Taylor.

The restrictions are going in place "to ensure the area is as safe as possible for those coming downtown to express their First Amendment Rights, as well as those who live and work in the area," the Louisville Metro Police Department said in a statement on Tuesday morning.

"We recognize that this is an inconvenience, and will cause difficulty for those that live, work and have business downtown, and we apologize for this inconvenience. However, public safety is our number one priority, and it would be irresponsible if we did not take preemptive action to preserve it," police said.

"I hope, we hope, that all of this is simply not needed, that it will be a peaceful situation and we'll all be talking in a week going, 'Wow, that was something we didn't need to do,' " Schroeder said. "But on the front side of it, where we don't know what's going to happen, we have to plan the best we can to protect the public."

In addition, Louisville Mayor Greg Fischer signed two executive orders -- one that declares a state of emergency "due to the potential for civil unrest" and another restricting some vehicular access downtown, according to a statement released by his office Tuesday afternoon.

While the city is under a state of emergency, the mayor may exercise "any of his emergency powers, including those to hire or contract for services, and implementing curfews and other restrictions," the city announcement said.

The closures come as a grand jury has been empaneled in Louisville, and sources have told CNN that it will at some point take up Taylor's case.

The timing of that decision remains unclear. Still, the closures of some federal buildings, restrictions to downtown areas and LMPD's declaration of a state of emergency suggest that a decision is imminent. In addition, downtown restaurants and stores have been boarded up ahead of any potential unrest.

Taylor, a 26-year-old emergency room technician and aspiring nurse, was fatally shot after police broke down the door to her apartment while executing a late-night "no-knock" warrant in a narcotics investigation on March 13.

None of the officers involved in her death have been arrested or charged. Two remain on the force, while a third officer was fired and is appealing to get his job back.

Her death has led to widespread protests as part of the Black Lives Matter movement and calls for justice for Taylor and other Black victims of police violence.