Body in barrel discovered at Lake Mead is likely a gunshot murder victim from decades ago, police say 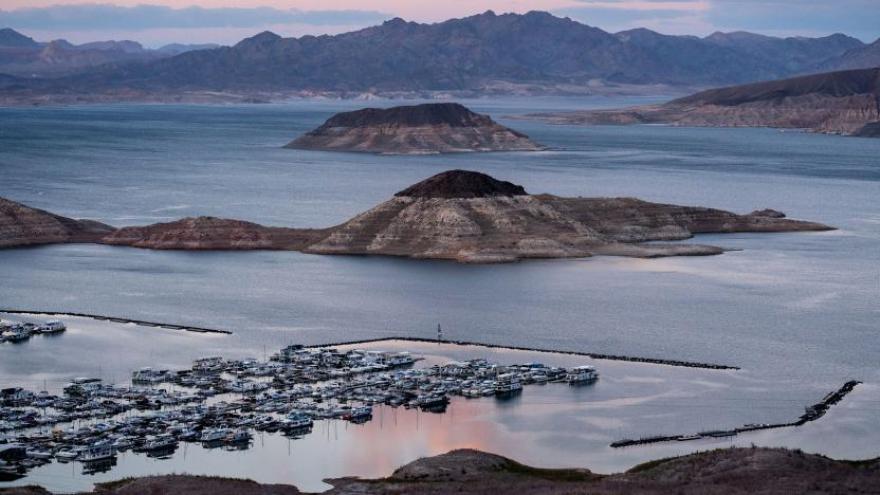 The Las Vegas Boat Harbor & Lake Mead Marina in February. The plunging water level in Lake Mead -- the country's largest reservoir, besieged by drought -- unveiled another disturbing discovery over the weekend, police say: a body in a barrel.

(CNN) -- The plunging water level in Lake Mead -- the country's largest reservoir, besieged by drought -- unveiled another disturbing discovery over the weekend, police say: a body in a barrel.

A person who was spending time at the lake Sunday afternoon found the barrel, according to Las Vegas Metropolitan Police Homicide Lieutenant Ray Spencer. The person could see the remains in the barrel because it was corroded.

Spencer said in a release Tuesday investigators believe the person was likely a murder victim who died from a gunshot wound.

According to the release, an investigation is now underway, and "detectives believe the victim was killed some time in the mid '70s to early '80s, based on clothing and footwear the victim was found with."

Investigators are working to confirm the identity of the victim, which will be released by the Clark County Coroner's Office.

About 25 million people in Arizona, Nevada, California and Mexico rely on Lake Mead water, which has been running out at an alarming rate amid a climate change-fueled megadrought.

"The lake has drained dramatically over the last 15 years," Spencer said previously, noting "it's likely that we will find additional bodies that have been dumped in Lake Mead" as the water level drops more.

"The barrel was likely dropped hundreds of yards off the shore back then," Spencer said, "but that area is now considered the shoreline."

As of Monday the lake's water level was around 1,054 feet above sea level -- about 160 feet below its 2000 level, when it was last considered full. It's the lowest level on record for the reservoir since it was filled in the 1930s.

In August, the federal government declared an unprecedented water shortage on the Colorado River, which feeds the reservoir, triggering water consumption cuts for states in the Southwest beginning in January.

Last week, the lake's low water level also exposed one of the reservoir's original water intake valves for the first time. The valve had been in service since 1971, but it can no longer draw water, according to the Southern Nevada Water Authority, the agency responsible for managing water resources for 2.2 million people in southern Nevada, including Las Vegas.

Upstream on the Colorado River, water levels at Lake Powell -- the country's second-largest reservoir -- have also been plummeting and recently dipped below a threshold that threatens not only downstream water supply but also hydropower generation for the surrounding communities.

Across the West, extreme drought has already taken a major toll this year, with around 91% of the region in some level of drought, according to the US Drought Monitor. Extreme and exceptional drought, the two worst designations, expanded across New Mexico, Arizona and Colorado -- all states in the Colorado River basin.