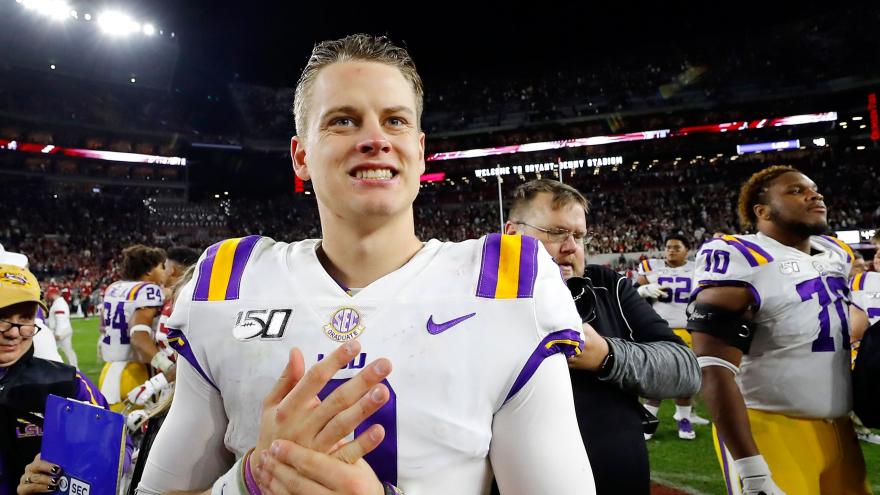 The trophy is awarded annually to "most outstanding football player in the United States." The last LSU player to win the Heisman wasrunning back Billy Cannon in 1959, according to the Heisman website. Burrow, a fifth-year senior, is the first LSU player to be named a Heisman finalist since Tyrann Mathieu in 2011.

"I want to thank my O-line first," Burrow said through tears. "Those guys are unbelievable, I couldn't have done it without them."

Burrow transferred from Ohio State in 2018. In his second season with the LSU Tigers, Burrow led the team to a 13-0 season, a 2019 Southeastern Conference (SEC) title and the top seed in the 2019 College Football Playoff, the Heisman website states.

Burrow led the nation with 48 touchdown passes and set an NCAA record in completion percentage (77.9). He also became the first player in SEC history to throw for more than 4,000 yards and 40 touchdown passes in a single season.

"My journey, I wouldn't have traded it for anything in the world," Burrow said.

"Just want to congratulate you on winning the Heisman, so well-deserved, such a phenomenal season," Brees said. "It was so much fun to watch. You deserve it and you enjoy it."

Mathieu, now with the Kansas City Chiefs, took to Twitter to congratulate his fellow LSU alumnus.

The Heisman Memorial Trophy is named in honor of longtime college football coach John W. Heisman, who was also the athletic director of the New York Downtown Athletic Club.