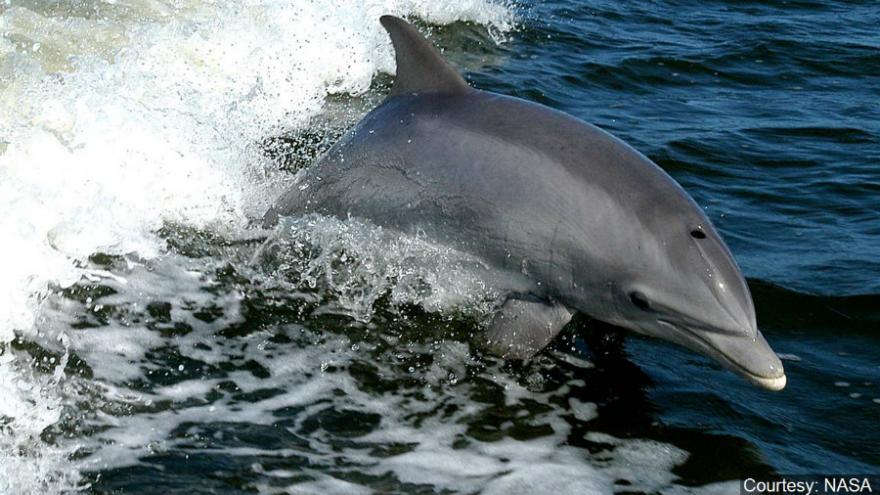 (CNN) -- Watching "Jaws" as a kid might have left you with a lifetime fear of swimming with sharks, but who knew swimming with dolphins could be dangerous?

The pretty coastal village of Landévennec in Finistère, in France's northwestern Brittany region, has been terrorized by a sexually aroused dolphin getting too close to swimmers.

The dolphins antics got so bad that the local mayor, Roger Lars, banned bathing on the Brittany beach, issuing a new bylaw. Now local swimmers are prevented from getting closer than 40 meters to the dolphin.

The aquatic mammal was apparently once known for its gentle behavior -- he's something of a local celebrity on the Brittany coast and affectionately nicknamed Zafar. But now that he's searching for a mate, the dolphin has become increasingly aggressive.

Local officials stepped in amid fears swimmers were in danger.

"The prefect of Finistère supports the practical decision taken by the mayor of Landévennec banning swimming in the presence of the animal, which contributes to the security of everyone, including the most experienced swimmers," said the official Twitter account for the department of Finistère.

Brittany is a region of France known for its beautiful beaches and plentiful sailing and swimming opportunities. Quiet Landévennec is also home to the striking ruins of a coastal abbey that dates back to the fifth century.

Lars told French media that he had issued the ban on August 20 in order to protect people.

Samy Hassani, director of species conservation at Océanopolis -- the local ocean discovery park in Finistère -- attributed the dolphin's behavior to the fact the mammals usually travel in packs.

"If he becomes lonely, he will look for contact, rubbing himself against boats, or people," Hassani told Ouest France.

Lars said that Hassani's advice had prompted his decision to issue the bylaw.

Others thought the ban was unnecessary. Local lawyer Erwan le Cornec told Le Telegramme that the new bylaw was excessive and contributed to the "demonization" of the dolphin. Le Cornec has vowed to campaign against the decree, also pointing out bylaws don't exist for other sea creatures -- such as jellyfish.

But good news for Landévennec swimmers came on Monday -- the dolphin has apparently moved down the coast, meaning local bathers can swim safely.

Time will tell whether the dolphin has found a mate or if he'll be back.