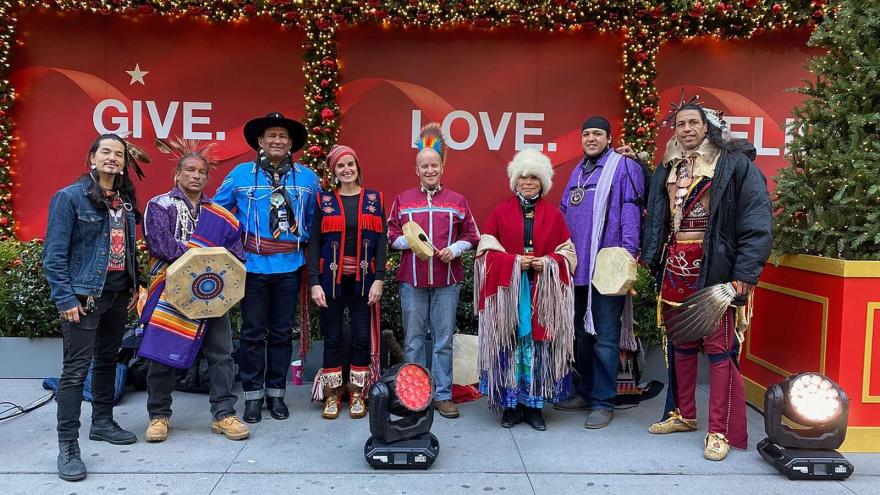 The 2020 Macy's Parade featured a land acknowledgment, traditional rattle song and a blessing honoring people of Native American tribes historically based in the Northeast.

(CNN) -- The Macy's Thanksgiving Day Parade looked a little different this year, and it wasn't just the Covid-19 protocols.

The 2020 parade featured a land acknowledgment, traditional rattle song and a blessing honoring people of Native American tribes historically based in the Northeast.

"Did you catch the performance of the Wampanoag Language Blessing?" Macy's tweeted just after 10 a.m. ET, with a photo of man who took part.

The parade highlight came as Indigenous people across North America move to reclaim their lands, a campaign that is gaining steam as the US grapples with injustices committed against marginalized communities.

The tradition featured Thursday acknowledged the Lenape territory of Manahatta -- the site of the parade in New York's borough of Manhattan -- according to a news release from Indigenous Direction, a firm that consults on Indigenous cultural protocols in theater and film and collaborated on the segment.

In English, the blessing translates into: "Creator and Ancestors, we honor you for all things. We honor the Lenape people of Manahatta. We honor all our relations because, long ago, we were here. Now we are here and we will always be here. And so it is," according to the release.

The Mashpee Wampanoag Tribe, also known as the People of the First Light, has inhabited present-day Massachusetts and eastern Rhode Island for more than 12,000 years.