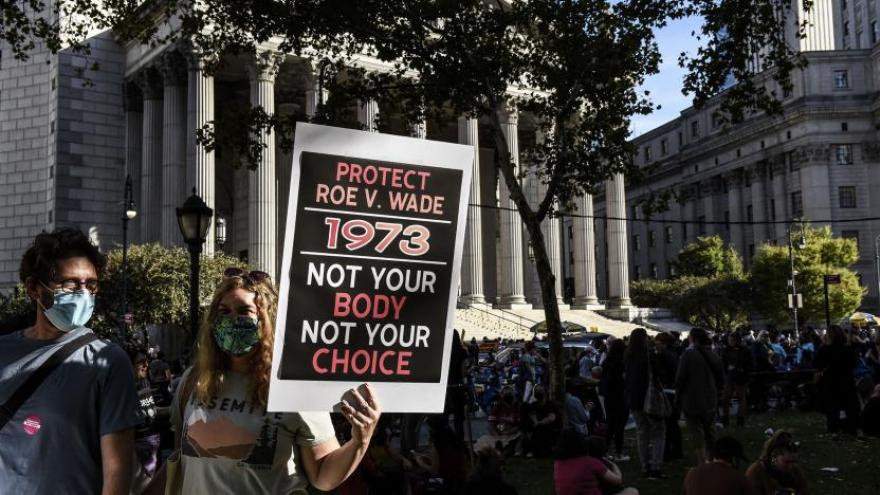 (CNN) -- A majority of Americans support the US Supreme Court upholding its landmark decision in Roe v. Wade guaranteeing a constitutional right to abortion, according to a new ABC News/Washington Post poll.

The poll finds that 60% percent of Americans say Roe v. Wade should be upheld, while 27% say it should be overturned.

The high court is scheduled this December to hear arguments on a Mississippi law that would ban most abortions after 15 weeks of pregnancy, a case that represents a direct challenge to Roe.

The poll also shows that a majority of Americans are opposed to a Texas law banning most abortions after about six weeks of pregnancy. The Texas law also allows private citizens to sue anyone who performs the procedure or assists a pregnant person seeking an abortion in violation of the ban. The court has limited its review to the unusual way in which the bill was written and whether the US Justice Department can challenge the law in court. The justices heard challenges to the Texas abortion law case earlier this month.

Sixty-five percent of Americans say the Supreme Court should reject the law, while 29% say the law should be upheld.

More broadly, 58% to 36% of Americans oppose states considering or passing laws that make it more difficult for abortion clinics to operate there.

Three out of four Americans say that the decision of whether or not a woman can have an abortion should be left to the woman and her doctor.

The ABC-Post poll was conducted from November 7 to November 10 among a random national sample of 1,001 adults on cellphones and landlines. The overall results have a margin of sampling error of plus or minus 3.5 percentage points.