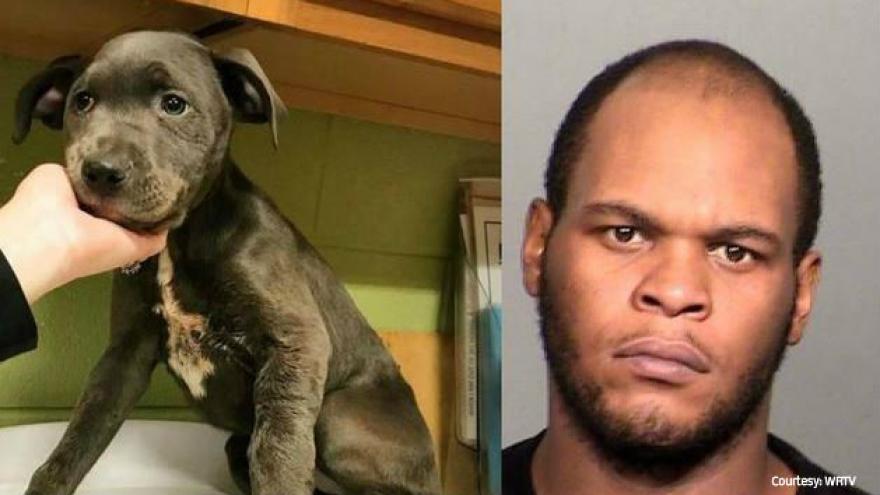 Zionsville, IN (WRTV) -- A man has been arrested and charged with severely beating a 4-month-old puppy so badly that he broke multiple bones.

Lemontrae Bible, 24, was arrested Friday at a home on N. Kenyon Street. According to police reports, Bible was charged as part of an investigation into animal abuse where a 4-month-old puppy was beaten severely.

Bible's girlfriend, Holly Brand, says he started hurting the puppy shortly after she got it for her daughter.

"He had pistol whipped her and actually had a broken tooth," said Brand.

She says the abuse started after the puppy had an accident in their home.

"I didn't really think it was that bad - I didn't want to believe it. I don't know. I should have stepped up more sooner," said Brand.

Officers with the Indianapolis Metropolitan Police Department found the puppy while responding a house on N. Kenyon Street.

The puppy, named Halsey, is being cared for by Zionsville-based rescue Every Dog Counts. The group shared some of Halsey's story on their page Thursday, along with a link to raise money for her care and recovery.

Halsey was so abused that she suffered extensive jaw and head fractures, broken bones and had to have a tube inserted so that she could get nutrients while she recovers.

"Her abuser left her with multiple skull fractures, a broken jaw, multiple broken ribs and a badly broken forearm," the rescue posted on their Facebook page. "She sat like this for days, with no help or pain relief before she was found and rescued."

Halsey went in for surgery on Thursday, according to the rescue, to try to save her leg, which was broken completely in two.

"Through the process of multiple diagnostic tests, we've realized that this has probably been going on for a while - more than one incident," said Dr. Johnny Cross, Medical Director, VCA Advanced Veterinary Care.

"It is simply not fair for life to have been so brutal and painful for this baby," the rescue posted.

The rescue will also help find Halsey find her forever home when she's fully recovered and ready to be adopted.

Bible is charged with animal cruelty and possession of a firearm by a serious violent felon.