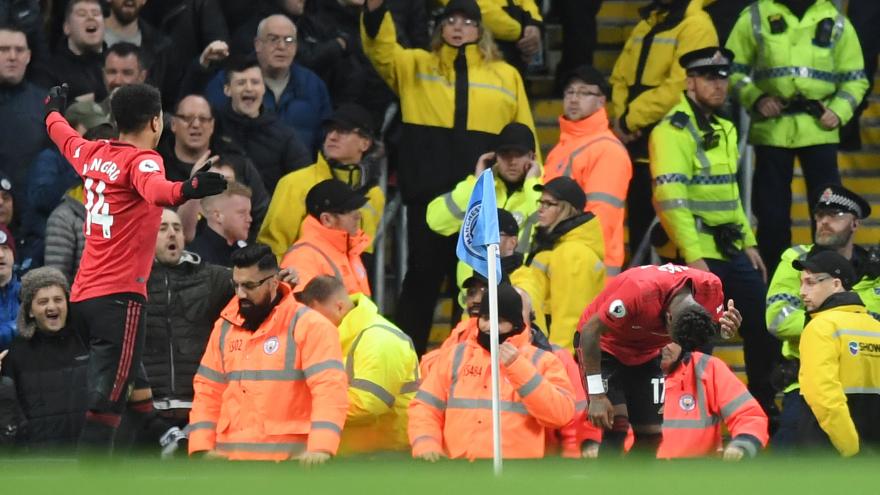 (CNN) -- A 41-year-old man has been arrested over an alleged incident of racist abuse by a Manchester City fan during the derby match against crosstown rival Manchester United Saturday.

A video circulating on social media appeared to show a fan making abusive gestures towards United players during their team's 2-1 victory in the English Premier League match at City's Etihad Stadium.

A statement released by City after the match said it was aware of a video and that the club would be working with Greater Manchester Police to identify any individuals responsible.

READ: FIFA and UEFA 'may as well have stood in stands with racists,' says ex-England star

" A 41-year-old man has been arrested on suspicion of a racially aggravated public order and remains in custody for questioning," said a statement released by Greater Manchester Police Sunday.

Superintendent Chris Hill of the City of Manchester Division said: "We will continue to work with Manchester City and Manchester United Football clubs on this incident and will investigate any other lines of enquiries."

The English Football Association also confirmed Sunday that it would be investigating the incident, which has drawn widespread condemnation.

United manager Ole Gunnar Solskjaer told BBC's Match of the Day program: "I've seen it on the video, it was Jesse [Lingard] and Fred and the chap must be ashamed of himself," he said.

"It's unacceptable and I hope he will not be watching any football any more."

Lingard also retweeted a social post containing the video, writing: "Not even this idiot can ruin tonight's feeling. Shameful behavior, it may be the derby but there is never ever a reason to be racist."

READ:How the scourge of racism continues to tarnish English football

Football around the world has experienced an increasing number of racist incidents in recent years.

United forward Marcus Rashford, who scored his team's opener from the penalty spot after he was bundled over by City's Bernardo Silva, was part of the England squad when its black players were subjected to monkey chants and Nazi salutes during a Euro 2020 qualifier in Bulgaria in October.

"The fact it is still happening is not good enough," he was quoted as saying by the BBC.

"The necessary departments need to do the right things to stop it in the game. It is a big negative in the sport and the country."

Anti-racism body Kick It Out said: "We hope swift action is taken to identify the offenders."

In Italy this season, Inter Milan's Romelu Lukaku was the subject of monkey chants from Cagliari fans and Brescia striker Mario Balotelli said he had experienced racial abuse by opposition Verona fans.

READ: Georginio Wijnaldum is ready to walk off pitch if subjected to racist abuse

Both incidents were met with meager penalties -- Verona was handed a one-match partial stadium closure and Cagliari escaped any serious punishment.

In the Manchester derby, Anthony Martial added to Rashford's opener with a smartly taken shot inside 30 minutes before Nicolas Otamendi pulled back a late consolation with a header from Riyad Mahrez's corner.

City, which has won the last two Premier League titles, is third in the table, 14 points adrift of leader Liverpool. United is eight points further back in fifth.