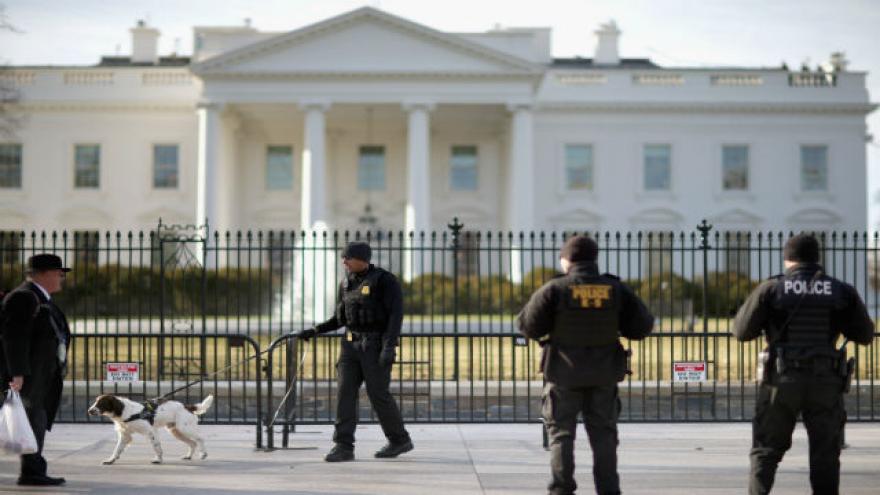 The Secret Service arrested a man near the White House on Monday, after they had been told to be on the lookout for a man who allegedly threatened to kill \"all white police\" there. Photo courtesy Chip Somodevilla/Getty Images

(CNN) -- The Secret Service arrested a man near the White House on Monday, after they had been told to be on the lookout for a man who allegedly threatened to kill "all white police" there.

Monday afternoon, police in Montgomery County, Maryland, alerted the US Secret Service that the man planned to go to Washington with the purpose of killing officers at the White House, according to a USSS statement. About an hour later, Secret Service officers spotted him on Pennsylvania Avenue near Lafayette Park, according to the statement. He was arrested without incident. Officials say charges are pending.

US Secret Service said the man, Michael Arega of Dallas, was officially charged with making felony threats, and was not armed with a weapons at the time of his arrest.

The Secret Service's protective intelligence division was notified at about 2:55 p.m. ET to be on the lookout for Arega, who the Montgomery County Maryland Police Department said was heading to Washington for the purpose of killing "all white police" at the White House, according to the statement. The Secret Service spotted him at approximately 4:05 p.m. ET.

He was "immediately detained by Secret Service Uniformed Division Officers and subsequently arrested without incident," according to the statement.

The man's ex-wife alerted police from her home in Texas, according to Montgomery County Police spokesman Capt. Paul Starks.

Starks said the man's ex-wife was concerned about her ex-husband's mental and emotional health and that he had stopped taking his prescribed medications. She called police when she had discovered "troubling messages" on his Facebook page.

Montgomery County Police sent officers to the hotel that the man had checked into on Facebook in Silver Spring, Maryland, but the man was gone by the time officers arrived.

Starks said the man's former wife did the right thing in contacting police.

UPDATE: This story has been updated to reflect the latest information from the Montgomery County Police Department.