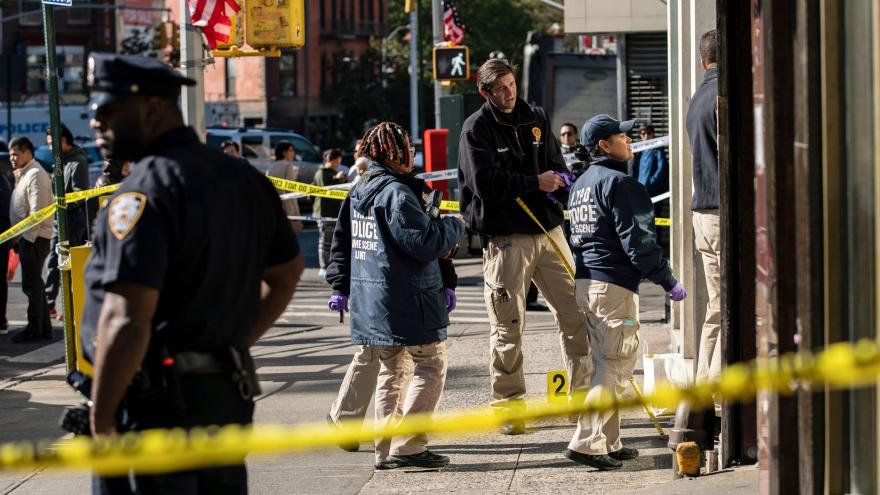 (CNN) -- The suspect in Saturday's fatal attacks on sleeping homeless men in Manhattan's Chinatown neighborhood has been charged with four counts of murder, according to NYPD Detective Ahmed Nasser.

The suspect was identified as 24-year-old Randy Rodriguez Santos, who is also homeless, police said.

Santos, who police said has been arrested at least six other times, has also been charged with attempted murder and unlawful possession of marijuana, Nasser said.

The ages of three of the four homeless men killed in Saturday's attacks are 45, 50, and 83. The age of the fourth male victim is unknown. The fifth man who was injured in the attack is 49, Nasser said.

Santos is expected to be arraigned later Sunday, according to Justin Henry, press secretary with the Manhattan District Attorney's Office.

The murder charges come after four homeless men were killed -- and a fifth seriously injured -- around Manhattan's Chinatown neighborhood overnight into Saturday. The suspect struck their heads with a metal object, apparently while they were sleeping, New York City police said Saturday.

Officers found the victims early Saturday in three locations in or near Chinatown after someone called 911 to report one of the assaults shortly before 2 a.m., NYPD Assistant Chief Stephen Hughes said.

Investigators found a metal object -- possibly a pipe -- that they believe was used in the attacks, NYPD Deputy Chief Michael Baldassano said.

Police were scouring the crime scenes Saturday morning and weren't immediately able to explain why the attacks happened.

The grisly discoveries began after someone called 911 at 1:49 a.m. to report an assault near a building at 2 Bowery in Chinatown, Hughes said.

The officers found a man -- later pronounced dead -- lying in the street with severe head trauma. A second man with head injuries approached the officers and was taken to a hospital in critical condition, Hughes said.

Two witnesses told police they saw a man in a black jacket and black pants strike someone numerous times with a metal object before fleeing, according to Hughes.

Officers started searching the area and found a man matching the attacker's description about a quarter-mile away, Hughes said.The man was taken into custody.

All four bodies were found within roughly a two-block area.

Officers' conversations with the injured man have been limited, but investigators hope to talk with him further, Baldassano said.