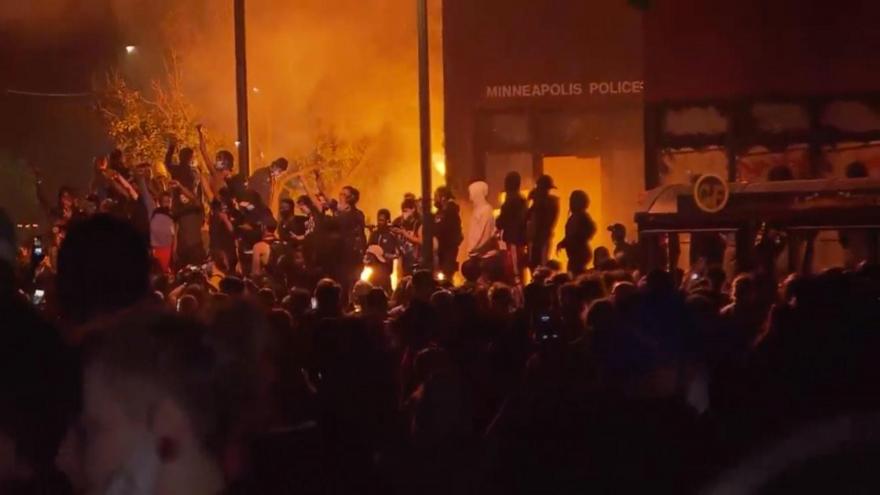 Minneapolis Police Department's Third Precinct was set on fire by protestors during the night of May 28. Federal officials have charged Branden M. Wolfe, 23, of St. Paul for his alleged role in the May 28 fire that heavily damaged the Third Precinct police station.

(CNN) -- Federal officials have charged a Minnesota man for his alleged role in the May 28 fire that heavily damaged the Third Precinct police station in Minneapolis during protests of George Floyd's death days earlier.

Branden M. Wolfe, 23, of St. Paul has been charged with aiding and abetting arson, the US Attorney's Office for the District of Minnesota said in a statement.

Wolfe was arrested June 3 while he was wearing several items stolen from the Third Precinct, including body armor, a police-issue duty belt with handcuffs, an earphone piece, a baton and a knife, according to the statement.

St. Paul police officers were called to a home improvement store June 3 on a complaint that someone, later identified as Wolfe, was trying to get into the store while wearing that police equipment, according to a criminal complaint.

Employees at the store told officers that Wolfe had been an employee, but was fired that day after "referring to social media posts about him stealing items" from the station, according to the complaint.

CNN has not been able to determine if Wolfe has an attorney. According to a statement from the US Attorney's Office, his initial court appearance is scheduled for tomorrow afternoon.

A search of Wolfe's apartment also turned up a riot helmet, a pistol magazine, police radio and police-issue overdose kit, according to the statement.

Wolfe admitted to authorities that he was inside the precinct that night, taking police property and pushing a wooden barrel into the fire, the complaint says.

Wolfe said "he knew the barrel would burn, make the fire bigger, and help keep the fire burning," the complaint says.

The man also identified himself "in multiple witness photographs" that showed him "in front of the Third Precinct holding a police baton, with smoke and flames visible in the background," the the US Attorney's Office statement says.