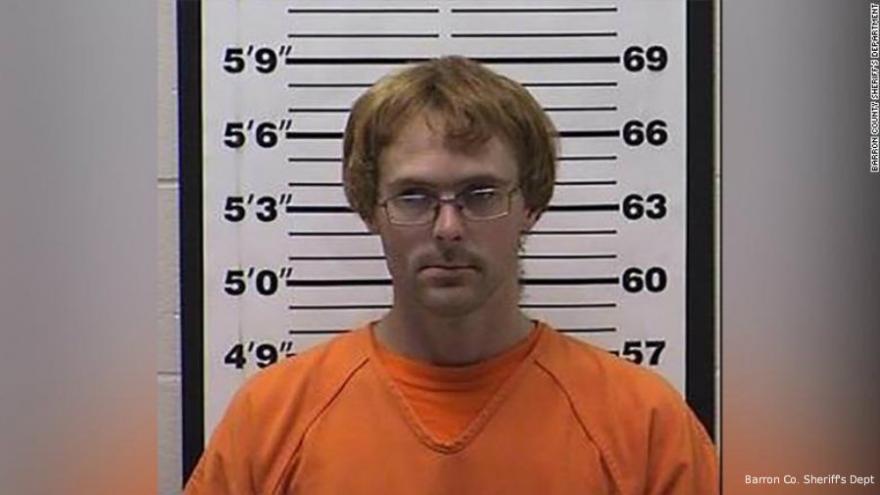 (CNN) -- A man has been charged with breaking into the home of missing teen Jayme Closs and stealing girl's underwear and other clothing, but he has been cleared of involvement in her disappearance, police said.

On motion-activated cameras installed nearby, Wisconsin Department of Criminal Investigation agents saw a man in a puffy jacket and skull cap break into the Closs home early Saturday through a patio door, according to a criminal complaint.

DCI agents and a sergeant with the Barron County Sheriff's Department responded to a 2:22 a.m. (3:22 a.m. ET) call and set up a perimeter around the home, located about 90 miles east of Minneapolis.

After seeing movement inside the home, the deputy returned to his squad car to retrieve his dog. Upon returning to the property, he heard the DCI agents ordering a man inside to come out with his hands up.

The man wore glasses and carried a flashlight, according to the complaint, and was identified as Kyle Jaenke, 32, of Cameron, Wisconsin.

He also had black gloves and a mask with a skull on the front, the complaint alleges.

FBI and DCI agents interviewed Jaenke, who said he went to the Closs home after leaving work at the Jennie-O Turkey Store in Barron, the same facility at which Jayme's slain parents worked. A 911 call led authorities to the Closs home on October 15, where they found the parents' bodies and learned Jayme was missing.

Jaenke told police that after leaving the store, he rode his bike to a laundromat in Barron and then walked to the Closs home, the complaint says. The patio door was unlocked when he arrived, he said, according to police.

"The defendant was asked how many items he took and he stated three or four items, including some underwear that he believed belonged to Jayme," the complaint says.

Jaenke said he did not know the Closses and he stole items that he thought the family wouldn't miss, according to the complaint.

"Additionally, the defendant stated he was curious about what size Jayme was," the complaint says.

Jaenke faces charges of burglary and felony bail jumping. According to the complaint he was released on bond August 11 for another burglary charge, and a condition of the bond was that he commit no other crimes. Arraignment in the first case is scheduled for December 19.

He appeared in court Monday for the latest case, where a judge set bail at $5,000. Jaenke is not allowed near the Closs home if he makes bail.

Andy Knaak, the attorney who represented Jaenke at Monday's hearing, had no comment on the case. It was not clear if Knaak will continue representing Jaenke, as court documents indicate the defendant does not qualify for a public defender.

Knaak also declined to say whether he would remain Jaenke's lawyer, referring the question to a spokesman for the public defender's office, who could not be immediately reached. Attempts to reach Jaenke were also unsuccessful.

The Barron County Sheriff's Office says it has received more than 2,000 tips about the 13-year-old's disappearance. It has cleared 1,875 of them.

Last week, the Closs family broke its silence when Jennifer Smith issued a message to her missing niece, saying, "We all love you to the moon and back, and we will never stop looking for you."

She added, "Your dog, Molly, is waiting for you. She's sleeping in one of your sweatshirts."

Jayme vanished October 15, and her parents were found fatally shot in their home near Barron, a town of 3,300 in northwestern Wisconsin.

Authorities say a mysterious 911 call led deputies to discover James Closs, 56, and Denise Closs, 46, shot dead. No one spoke to the dispatcher during the call, but the dispatcher heard yelling, police say.

When the dispatcher called back, the call went to Denise Closs' voicemail. Police arrived to find the door kicked in.

A search party of about 2,000 people last week didn't find any new clues in the case, Sheriff Chris Fitzgerald said. He believes Jayme is alive and is endangered.

The FBI is offering a reward of $25,000 for information that leads to Jayme's location.Jennie-O Turkey put up another $25,000, saying in a statement that "Jim and Denise were long time members of the Jennie-O Turkey Store family."

Jennie-O released a separate statement saying the company employed Jaenke from 2012 to 2016. Since then, he has worked for Jennie-O as a temporary employee via an agency the company uses, it said.