Man cuts off thumb by accident, has it replaced with his own big toe 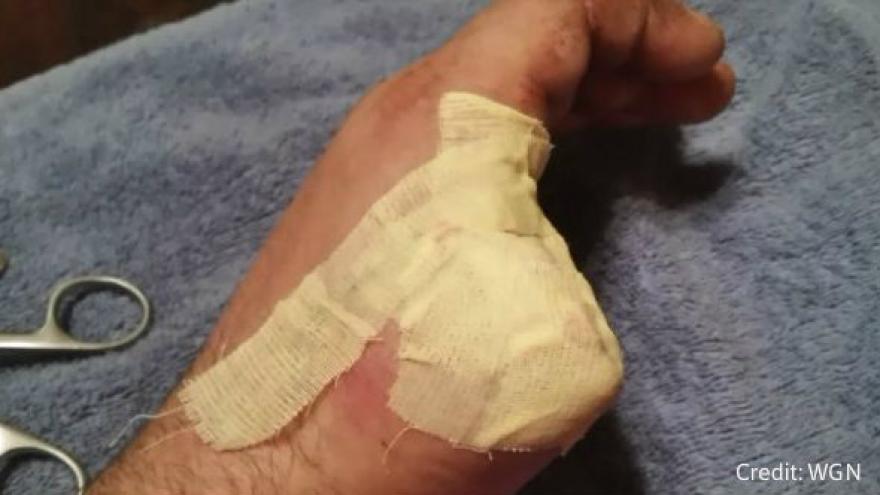 Chicago, Ill. (WGN) -- Melo Hairapetian was trimming wood one day when the unthinkable happened: in a matter of seconds, the saw made a quick and powerful cut across the palm of his hand. His thumb was gone and his pinky was dangling.

“My knee buckled, caught my jacket and pulled my hand right through the circular saw,” Melo said.

Doctors tried to salvage his thumb, but it didn’t take because the finger and joint were too badly damaged. A few months later, the 45-year-old opted for Plan B, a rare procedure to replace the missing thumb with one of his own toes.

Melo said he first heard about the surgery on T.V. when he was a kid. It’s not a common procedure, but hand surgeons learn about it during their training.

“This is an incredibly complicated procedure that all of my training has prepared me for,” said Dr. Sonya Agnew, a hand surgeon from Loyola Medicine.

In a 16-hour surgery, Loyola Medicine hand surgeons Sonya Agnew and Sameer Puri worked as a team, one at Melo’s foot, the other at his hand, simultaneously preparing each area for the delicate transfer.

“Once the toe has been removed, we place it on the base of the thumb and fix the bone together so it’s nice and stable. And then we can do the delicate microsurgery and repair the tendons and the skin as well,” Dr. Agnew said.

On X-ray it’s tough to tell the difference; the toe looks pretty natural as a thumb. And at the foot, what’s missing hasn’t left Melo unsteady on his feet. Dr. Agnew said patients can recover balance because they leave behind the knuckle part of the toe.

“The hardest thing about the big toe, when it’s not there the toe next in line has to be the big toe. And you don’t realize what kind of work your toe is doing. To get those muscles to strengthen up, it took a while. It’s very painful,” Melo said.

Because his original injury was so severe, the lower joint in Melo’s new thumb is fixed, so the new appendage acts more like a post. But it still allows Melo to have significantly more function.

Melo said he's now doing, "100 percent" more than he could before. It hasn’t come easy. For months, he's been working with occupational therapist Kim Esposito to relearn simple tasks.

“It’s like being a little child and picking up Cheerios, trying to learn the dexterity, the feeling. It’s day by day,” Melo said.