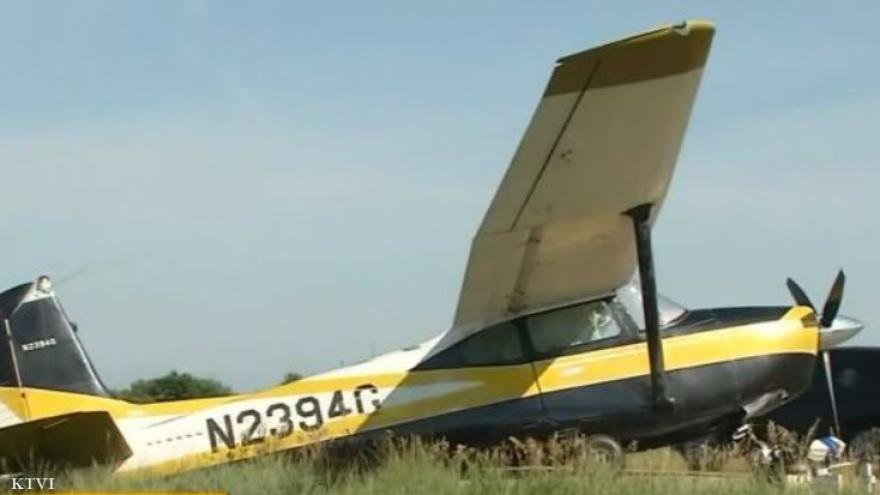 The terrifying ordeal unfolded on Interstate 55 near Lincoln.

Illinois State Police said the Cessna single-engine plane hit Jeremy Kampwerth’s car as the pilot tried to make a crash landing in the middle of the southbound lanes.

“I thought it was a truck coming over to my lane,” said Kampwerth during a phone interview with FOX 2, driving back to

O’Fallon in the same car that was involved in the crash.

Kampwerth and his 9-year-old son were driving back from Chicago after attending a Cardinals versus the White Sox game Tuesday night.

“It was flying really low on the northbound lane and it kind of looked like he was gonna try to land but then he turned so I didn’t think much of it,” Kampwerth explained.

Kampwerth said that at first, he thought it was a crop duster just flying really low until he saw the pilot turn and then fly over the southbound lanes.

“He was having trouble and obviously tried to land and he hit me from behind,” he explained.

Kampwerth said that’s when he heard glass shattering in the back.

“My son was sitting in the back-seat passenger side,” Kampwerth said, “and that’s the side where the plane hit and he was screaming.”

Kampwerth said that during the chaos he managed to notice that the plane was missing a wheel and eventually came to a halt on the southbound lanes.

“The plane could’ve hit a foot higher or wherever and he would’ve been at my son’s head or the prop could have came into the car” Kampwerth went on to say, “I’m sure that guy was having a bad day and he was in trouble.”

Police said the pilot, 51-year-old William Farnsley of Austin, Indiana was attempting to land at Logan County Airport but for unknown reasons, the plane lost power before the emergency crash landing.

“I’m just so thankful that my son is ok, that I’m ok and that the pilot was ok,” Kampwerth said, “a few dings and dents is nothing compared to what could have happened.”