Man held after four killed in a stabbing rampage in California 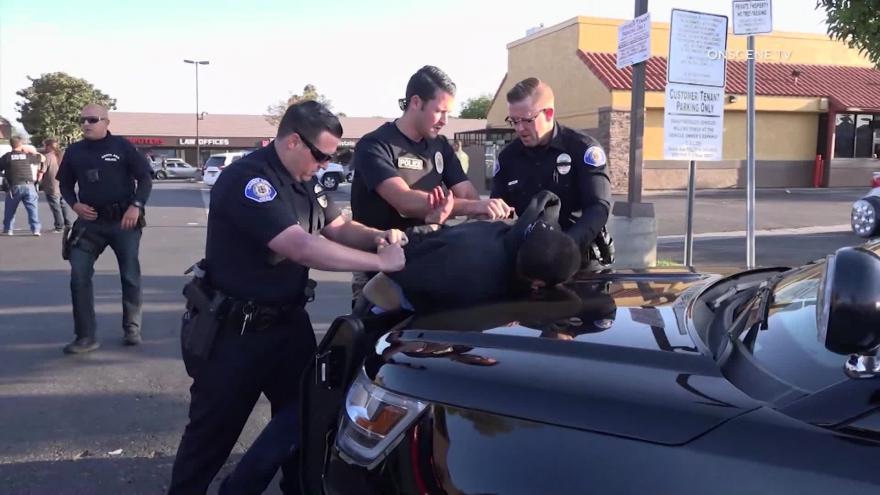 (CNN) -- A man who allegedly killed four people during a stabbing rampage in Southern California has been identified as a known gang member, police said Thursday.

There were at least eight crime scenes in Garden Grove and Santa Ana, about 35 miles from Los Angeles. Garden Grove Police Chief Tom DaRé described Castanega as a "documented gang member," but did not say what gang he was affiliated with.

Those killed included a security guard at a 7-Eleven, two people at the suspect's apartment complex and another person outside a Subway restaurant, authorities said. Two others were injured.

"We don't know if the motive behind this was purely for robbery, but there was no indication that this was a hate crime," Garden Grove Police Lt. Carl Whitney said. "We just know this was a random act of violence and the guy unleashed evil across our two counties."

Castaneda faces a minimum sentence of life in prison without the possibility of parole if he's convicted on all charges, the district attorney's office said in a news release. He is eligible for the death penalty.

Castaneda "was currently out on bail on three separate felony Orange County cases, including a July 19, 2019 arrest which resulted in felony charges of carrying a dirk or dagger, misdemeanor drug possession and driving on a suspended license."

The mayhem began at 4:09 p.m. local time, when police first received a call of a residential burglary at an apartment, Whitney said.

The call was put in a holding queue until an officer could be dispatched to handle the report, Whitney said. Meanwhile, at 4:23 p.m., a robbery was reported at a bakery. Castaneda allegedly threatened the store clerk with a weapon and fled with cash.

He returned to the apartment complex, which was the location of the initial burglary report, Whitney said. Castaneda lived in an apartment adjacent to the one where the burglary was reported.

Police say they believe the burglary victims confronted Castaneda and an altercation occurred.

Both victims were stabbed. One died at the scene, and the other was taken to the hospital, where he died as a result of his injuries, Whitney said.

Police received another report of an armed robbery at a local business at 5:39 p.m., with a suspect description matching that of the first scene. The suspect threatened a clerk with a knife and fled the scene, Whitney said.

Just over 20 minutes later another robbery was reported at an insurance business. A female employee there was working when the suspect confronted her, and "without provocation, he stabs her multiple times," Whitney said.

He then moved to a check cashing business in the back of the same building, where a male clerk gave the suspect cash before he left, Whitney said. The woman and the man were hospitalized with serious injuries and are expected to survive, police said.

Another stabbing was reported at 6:09 p.m. at a Chevron gas station. Whitney said the victim was pumping gas when the suspect produced "two large machete knives" and attacked him, nearly severing his nose off and stabbing him in the back.

The suspect then finished pumping gas in his own vehicle and drove away toward Santa Ana, Whitney said.

Arrest at a 7-Eleven

Undercover detectives were able to locate the suspect's vehicle at a 7-Eleven in Santa Ana. Within a minute, Whitney said, the suspect came out of the store with a large knife and a handgun, which he had cut off the belt of the store's security guard after attacking him.

The officers ordered the suspect to drop his weapons and he complied, Whitney said. The security guard later died at a hospital.

Whitney said Castaneda killed one person during a robbery at a Subway restaurant before going across the street to the 7-Eleven.

Law enforcement from both Garden Grove and Santa Ana worked the crime scenes.

After his arrest, the suspect continued to be violent, police said. Castaneda -- who was covered in blood, Whitney said -- told detectives that the blood was actually tomato juice.

"He remained combative the entire time he was here," Whitney said.

There was no evidence Castaneda was under the influence, nor was Whitney aware of any history of mental illness.

"The flags behind me are at half-staff," Whitney said. "That's for the needless violence that's happened across the United States. This violence has to stop. And we're here in a collaborated effort together to try and stop this violence in Garden Grove."

Police are still conducting their investigation, but formal charges could be filed against Castaneda as early as Friday, Whitney said.

Castaneda was released from prison in January 2016. He had been convicted of multiple criminal counts, including drug possession and possession of a firearm, according to Luis Patino, a spokesman for the California Department of Corrections and Rehabilitation.

CNN has reached out to Castaneda's attorney for comment.