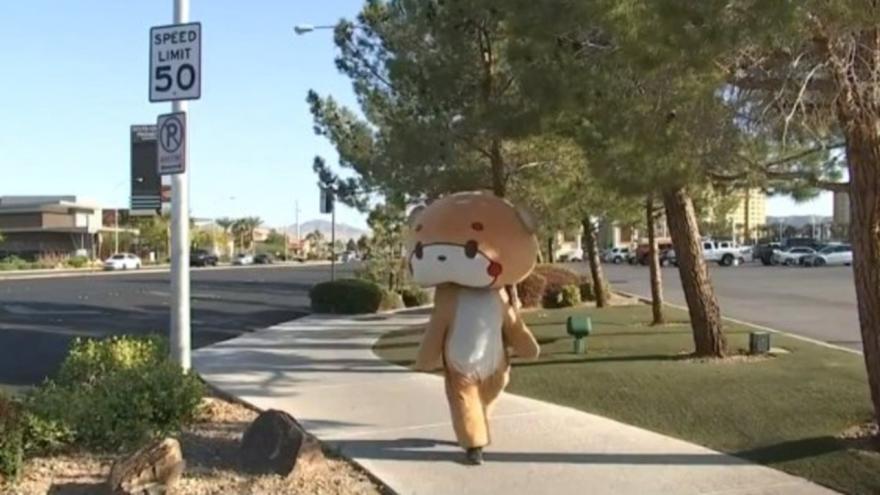 Jesse Larios is walking from California to Nevada --- including a trip across the desert --- in a bear suit to raise money for autism research. Photo courtesy: KVVU

LAS VEGAS (KVVU) -- A Los Angeles man best known as "BearSun" is on a journey to raise money for autism research.

For the last 10 days, the life-size teddy bear has been walking on side roads in California and Nevada. Though he's walked alone, he’s shared his journey with tens of thousands of people following him online.

FOX5 caught up with BearSun Friday afternoon, his fur was covered in dirt and it was nearly 100 degrees outside, but BearSun’s cartoon face matched his perpetually optimistic attitude.

“Man, I feel good. I am not even feeling the heat. I’ve been in the desert the past few days. I got used to it already,” BearSun, whose real name is Jesse Larios, said.

Friday morning, Larios woke up near state line and made his way to the Las Vegas Strip by sundown. He's been sleeping on the side of the road through his trip.

“Originally started off in Los Angeles went to san Diego and from San Diego I am here in Vegas,” Larios explained.

Larios first assumed his alter ego during the 2019 and 2020 LA Marathons, where he ran the 26.2 miles in full costume.

Last month, he walked from LA to San Francisco’s Golden Gate Bridge, raising $17,000 for the National Alliance on Mental Illness.

“I got a lot of requests from my first journey … people were bringing out their loved ones that have autism,” Larios said.

Larios quit his job in insurance sales to be BearSun full time and is now raising money for the National Foundation for Autism Research.

Ashley Gonzales’s daughter is autistic and the family has followed Larios' journey on social media. They found him not far from South Point casino.

“We wanted her to see that somebody is doing something for autistic awareness,” Gonzales said.

“The guy doesn’t even show his face. I don’t know what he looks like underneath,” said Michael Archila, who also tracked down BearSun to show his support.

Like a masked superhero, BearSun is an inspiration to his followers.

“He's a tough mental guy. I’ve been watching his livestreams. He says it’s all about what you are thinking mentally,” Archila said.

For BearSun, 1,000 miles in a month is just the beginning, as an even bigger adventure lies ahead.

“I’m excited because my next one is going to be in July from LA to NYC. I’ve just been like enjoying every single step … it’s been wonderful,” Larios said.

He's raised more than $8,000 so far, but his goal is to raise $10,000. To support BearSun's mission, visit his fundraising and social media pages.