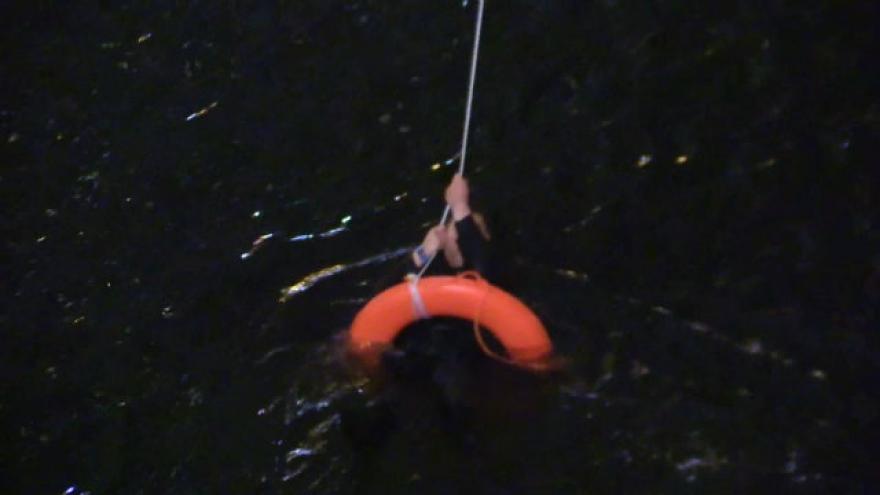 A security guard and several police officers rescued a man from the Chicago River early Tuesday, after he tried to go for a swim in below-freezing temperatures. Photo courtesy WBBM

CHICAGO (WBBM) -- A security guard and several police officers rescued a man from the Chicago River early Tuesday, after he tried to go for a swim in below-freezing temperatures.

The guard was working near Wacker and Dearborn, when he heard a man in the Chicago River screaming for help around 1:05 a.m.. He called police, and even helped officers with the water rescue.

The 29-year-old victim held on to a life ring as the security guard dragged him by a rope to get him to the other side of the river, where several officers were waiting to pull him out of the water.

“It took some time to run down the stairs, and then once initially all the officers had responded there, in order to lift him up, it was very much so a group effort, as well as we also noticed that the actual line that the security was pulling him along with was starting to rip as well,” Officer Joseph Reyes said.

The officers helped keep him warm before paramedics arrived, giving him a hat and yellow jacket. They then carried him up the stairs, where other officers surrounded the man to warm him before he was loaded into an ambulance.

Police said the victim was taken to Northwestern Memorial Hospital, where his condition was stabilized.

Officers said the man told them he was leaving a concert at the House of Blues, and had been drinking, and decided to try to swim across the river.

The man was in the water for about 10 minutes before the 911 call came in.

Police warned people to stay out of the water given the frigid conditions.