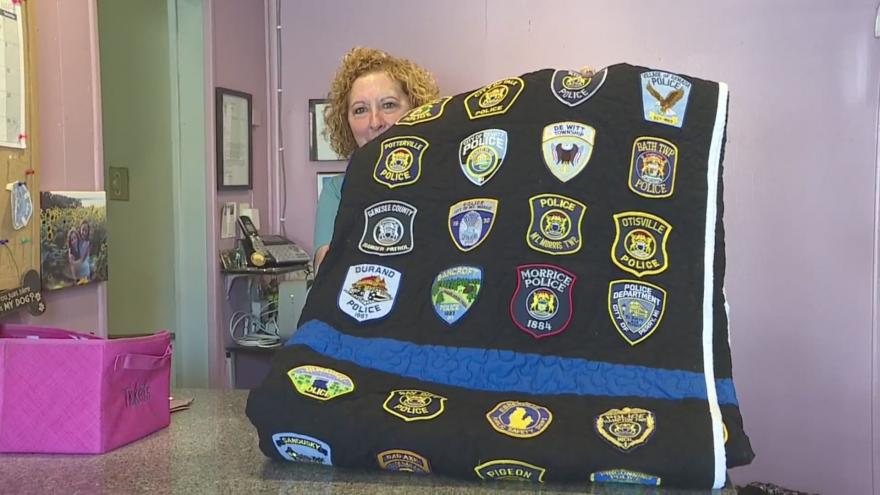 Kansas City, MO (WDAF) -- It’s a happy ending to a story many thought wouldn’t have one.

A young man traveling through Kansas City to college had his one-of-a-kind quilt stolen earlier this month.

Hundreds of police patches cover the quilt, and thanks to a few kind Kansas Citians, it’s on its way back to him with every stitch and patch still in place.

Three weeks ago the quilt was pulled out of college student Ryan Graham’s car and into a thief’s hands. Graham thought his handmade police quilt was gone forever.

“That really hurt me when I saw that quilt gone, especially having it less than a week,” Graham said.

About a week later, someone found it in the parking lot of Jack Stack Barbecue in the Crossroads. General Manager Tyler Banker said they saw Graham’s post on the Facebook group “Stolen KC,” messaged him and gave it to police.

“You could tell this was somebody who really cared,” Banker said. “It was a horrible incident. Someone breaking into their car and taking a one-of-a-kind, priceless item from an individual. To be able to give that back and give that joy — it just means the world to us.”

KCPD’s Sgt. Jake Becchina and Officer Doaa El-Ashkar brought the quilt to Joyce Jones who owns Speedy’s Cleaners on Independence Avenue. She got all the dirt out.

“It really was a one-of-a-kind thing, and we knew right when we were contacted that we had it back and everyone kind of rallied around that and it was kind of exciting,” Becchina said.

“All people in Kansas City are not bad. We are really good here. I just wanted to do it because I wanted to let him know we do care,” Jones said.

Now the quilt is on it’s way back to Graham, who is studying criminal justice and homeland security at Idaho State. He hopes to be a state trooper when he graduates.

“It makes you feel like there are good people out there,” Graham said. “Far and few between, but there are people who have a good heart out there that want to help other people.”

When Graham’s quilt was stolen, the department put out a request for patches. Becchina said dozens of patches came into the department, and they are working on making Graham a new quilt with a Kansas City patch included.