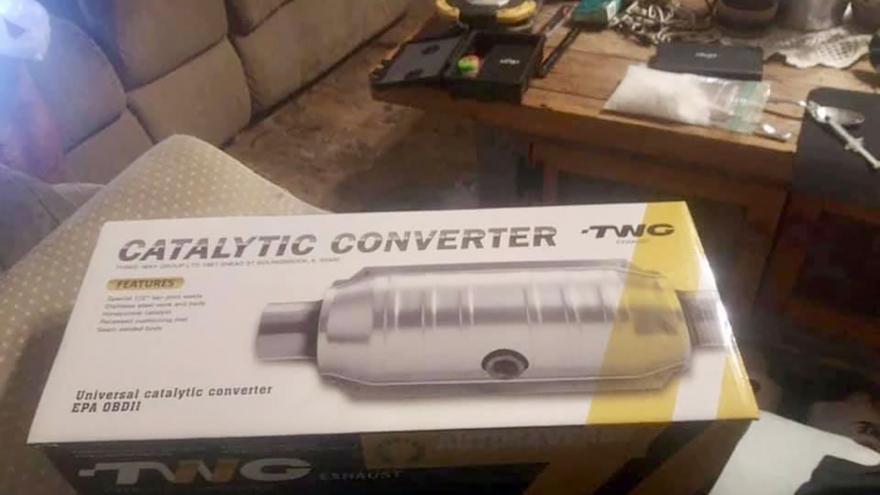 Authorities say, a man trying to sell a catalytic converter online left a bag of methamphetamine and a syringe in the background of the photo he posted. Credit: Stone County Sheriff\'s Office
By Raja Razek, CNN

(CNN) -- A man selling a catalytic converter on Facebook Marketplace left a large bag of methamphetamine and a syringe on the coffee table in the background of the picture he posted, the Stone County Sheriff's Office in Missouri said in a post on Facebook.

"Last night one of our Stone County residents posted a catalytic converter for sale on Marketplace. Apparently he must have been under the influence because in the background of his picture he posted, he left his large bag of meth and syringe on the coffee table," Sheriff Doug Rader said in the September 29 post.

Rader said he was alerted to the post by a citizen and passed on the information to a detective.

"Today we arrived at this gentleman's house with a search warrant. You can imagine his surprise!! He still had 48 grams of meth and a pistol that he is forbidden to own! We have now provided him a new place to stay. Sorry folks, his catalytic converters are not for sale right now," the sheriff's post said.

"Take note, if you are selling items on social media, make sure your drugs are not in the background!" Sheriff Rader added in the post.

James Anthony Kertz was being held in the county jail with no bond, Sherri Roe, a criminal data technician with the sheriff's office, told CNN.

Kertz, 38, was charged with possession of a controlled substance and probation/parole violation, the sheriff's office webpage said. CNN has not been able to determine if Kertz has a lawyer yet.