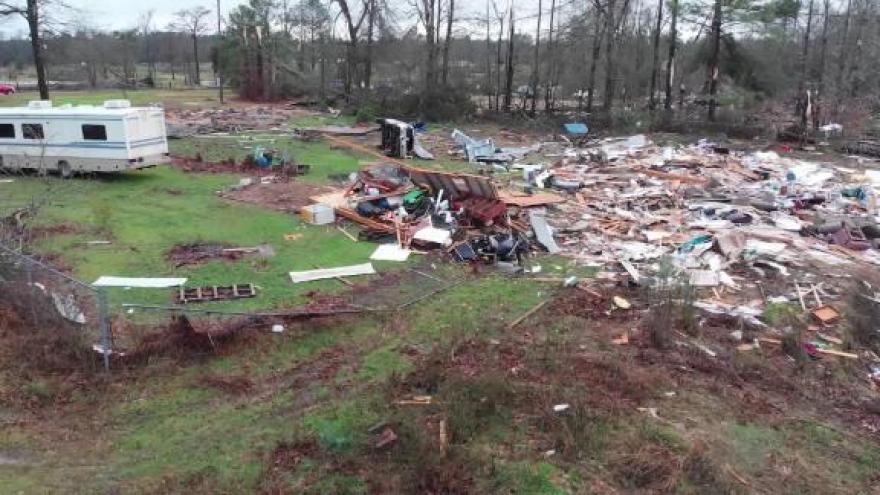 (CNN) -- An Oklahoma man was killed Saturday after getting swept away by floodwaters in Kiowa, Oklahoma, an incident report from the Oklahoma Department of Public Safety said.

This is at least the ninth storm-related death across the country since Friday, as severe weather and tornadoes have ravaged parts of the Midwest and South and rounds of crippling snow and ice have blanketed areas from Kansas to Michigan.

Randall Hyatt, 58, drove into deep floodwaters that made his pickup truck inoperable. He got out of his vehicle and that's when he was swept away, the report said.

Hyatt's body was recovered by Pittsburg County Swift Water team about 100 yards from his car around 8:15 p.m.

Oklahoma Department of Public Safety Director of Media Operations Sarah Stewart confirmed to CNN by phone the death was storm-related. Kiowa is about 100 miles south of Tulsa.

A wintry mix of freezing rain and snow began moving across the state Friday night, the National Weather Service said, and flash flood warnings were issued after heavy rain Friday.

Severe weather that persisted into Saturday has left two people dead in Texas, three in Louisiana and three in Alabama.

A severe storm demolished a home in Bossier Parish, Louisiana, on Friday night, and an elderly couple was found dead nearby, authorities said. And in Oil City, a tree fell on a home, killing a man, Caddo Parish Sheriff Steve Prator said.

In Texas, a vehicle fatally struck a firefighter and a police officer on an icy Interstate 27 in Lubbock Saturday morning while the pair were dealing with two previous crashes on the highway, Lubbock Police Chief Floyd Mitchell said. A second firefighter was struck and was in critical condition at a hospital.

Storms killed three people in Pickens County, in the western part of Alabama, Sheriff Todd Hall said. The victims came from an area near the town of Carrollton, where some structures were destroyed and others damaged, Hall said.