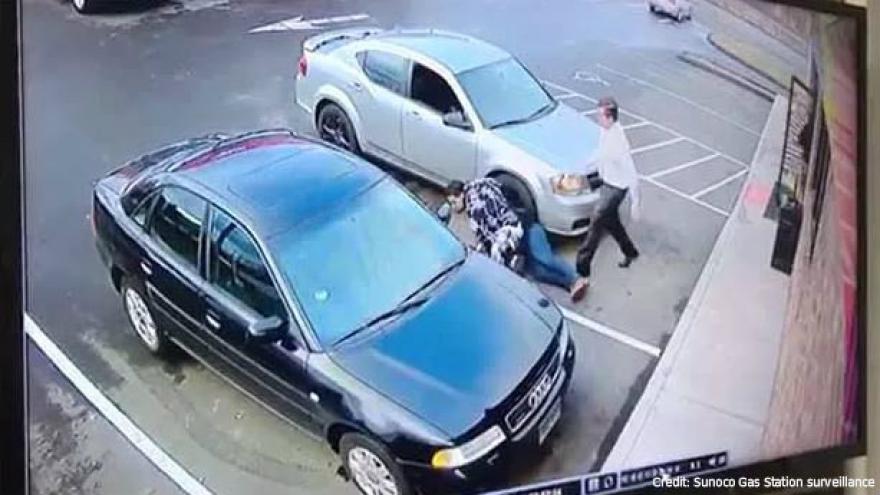 Willingford, CT (WFSB) -- A man who police said got a ride to a Wallingford gas station from a Good Samaritan, turned on her and tried to steal her car.

On Wednesday morning around 8 a.m., officers were called to the Sunoco Gas Station on South Colony Road for the report of an assault.

Before this, officers said a woman had stopped at a crash scene on I-91 near Exit 14. That’s where 32-year-old Juan Laporte, of Springfield MA. was after being involved in the crash.

The woman gave Laporte a ride to the Sunoco gas station, and when they got there he tried to steal her keys.

Surveillance video shows Laporte tackling the woman to the ground. That’s when another man steps in and kicked Laporte, helping the woman get free.

Laporte then got into the driver’s seat of a nearby Jeep while the operator was pumping gas.

Another man got into the passenger’s seat while Laporte tried to drive away. The passenger fell out of the car, and Laporte is seen fleeing onto South Colony Road.

The Jeep then looped back into the Sunoco parking lot, back onto the road and then back into the parking lot again where the front of the Jeep collided with a metal pole and stopped, police said.

Laporte was ultimately stopped by two or three men who detained him until police arrived.

Several people suffered minor injuries during this incident, including an officer.

He was arrested and is facing several charges, including third-degree larceny, carjacking, third-degree assault and breach of peace.

He was being held on a $100,000 bond and is expected to appear in court on Thursday.