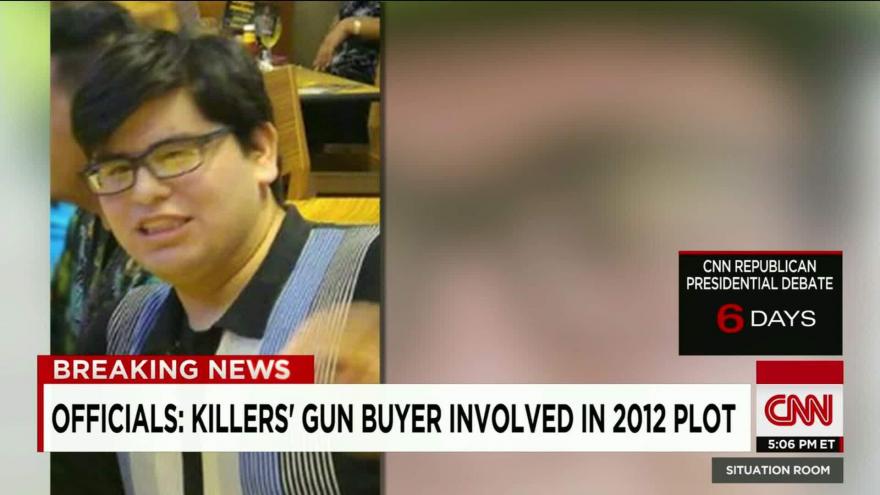 (CNN) -- The man who supplied the guns that a husband and wife used to kill 14 people in a 2015 terror attack in California has been sentenced to 20 years in prison, federal prosecutors announced Friday.

Enrique Marquez pleaded guilty to conspiracy to provide material support and resources to terrorists. The rifles were purchased, prosecutors said, in preparation for terror attacks that never happened -- one against a community college that Marquez and Syed Rizwan Farook had once attended, the other on a busy freeway.

But they were used by Farook and his wife, Tashfeen Malik, in their attack on the Inland Regional Center in San Bernardino, California. Fourteen people were killed and 22 were wounded. Farook and Malik died in a shootout with police hours after the attack on Farook's coworkers.

Prosecutors said Marquez's actions help to lay the groundwork for the San Bernardino massacre, which at the time was the worst terror attack on US soil since 9/11.

"By his own admissions, this defendant collaborated with and purchased weapons for a man he definitively knew held radical and anti-American beliefs -- and who wanted to kill innocent people," said Assistant US Attorney Tracy Wilkison in a press release.

Marquez, 28, also pleaded guilty to making false statements in connection with the acquisition of the semiautomatic rifles by serving as the "straw buyer," the US attorney's office said.

Marquez's attorney did not immediately respond to CNN's requests for comment.

Authorities have said Marquez and Farook knew each other for about a decade. In 2015, investigators said that by 2011, Farook and Marquez were spending most of their time at Farook's home, reading, listening to lectures and watching videos "involving radical Islamic content."

"He had contact with Farook until as late as October of 2015," Assistant US Attorney Christopher Grigg told reporters Friday. "We don't know the full extent of their relationship."

A day after the Farook and Malik went on their shooting spree, Marquez called 911 and told the operator that Farook was behind the San Bernardino attack, according to court documents.

Prosecutors said in a sentencing memorandum that Marquez "was a full, willing, and motivated participant of the conspiracy who not only provided the agreement necessary for the conspiracy to attack (Riverside City College) and (motorists on State Route 91), but also co-designed the attacks with Farook, purchased the two firearms and ammunition to facilitate the attacks, researched bomb making and obtained explosive powder and other bomb-making materials, and visited RCC and SR-91 to sketch out how he and Farook would attack the two locations to maximize casualties."

US District Judge Jesus Bernal denied Marquez's request for a five-year sentence, which essentially would have equaled his time served. Marquez was arrested about two weeks after the attack and has remained in custody ever since his first court appearance on December 17, 2015.

In court documents, prosecutors called this request an attempt to "downplay the seriousness of his actions, and skirt that his actions contributed to the mass killing and injuring of innocent people in San Bernardino just a few years later."

After he completes his sentence, Marquez will be placed on supervised release for 15 years, prosecutors said.

Prosecutors said that Farook's mother, Rafia Sultana Shareef, will be sentenced November 16 on a federal charge of intending to impede the investigation by shredding a map her son made. When Shareef pleaded guilty in March, prosecutors noted that under an agreement they would ask for a sentence of no more than 18 months.