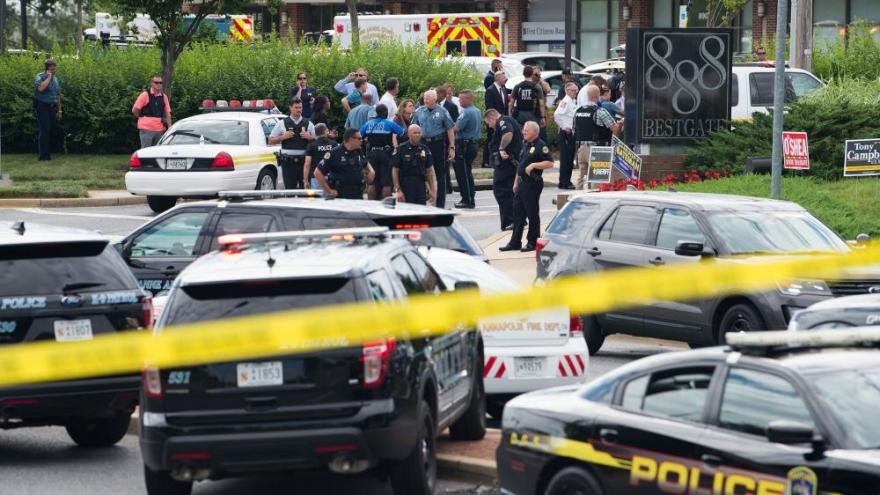 A man who killed five employees of Maryland's Capital Gazette newspaper in 2018 was sentenced Tuesday to five life sentences without parole.

(CNN) -- A man who killed five employees of Maryland's Capital Gazette newspaper in 2018 was sentenced Tuesday to spend the rest of his life in jail, prosecutors say.

Jarrod Ramos was sentenced to five life sentences without parole, plus one life sentence, plus 345 years, according to Anne Arundel County State's Attorney spokesperson Tia Lewis.

All sentences will run consecutively, the state's attorney's office said.

Ramos walked into the Capital Gazette offices in June 2018 and opened fire, killing five staffers. Two others were injured. A jury on July 15 found that Ramos was criminally responsible for the attack, rejecting his plea of insanity.

One of the slain staffers, sports journalist John McNamara, was about to finish his fourth book when he was killed, and had been looking forward to retirement in about three years, his widow said in prepared remarks for Tuesday's sentencing hearing, according to the Capital Gazette.

The widow, Andrea Chamblee, wrote she felt like she was "surrounded by a river full of gasping, flailing people, destroyed by a gun violence, floundering until we each realized in our own time that the only way up and out was boosting everyone who was kicking and drowning to the top together," according to the newspaper.

"The real victim impact is that he's gone when he deserved to be here," Chamblee's prepared remarks read. "He deserved to enjoy seeing his recognition, to enjoy this time in his life, and I was so hoping to see it and experience it with him, and pay him back for all the kindnesses that he gave to me. Now I never will."

Ramos had pleaded guilty but not criminally responsible in October 2019 to 23 counts, including murder, setting up this year's trial, at which a jury was asked to determine his mental state at the time of the shooting.

The trial began in late June following delays for a variety of reasons, including Covid-19, the Capital Gazette reported. The jury needed less than two hours to reach its verdict.

Heading into this week's sentencing, Ramos faced five life sentences without the possibility of parole, plus one additional life sentence for attempted murder as well as lengthy sentences for gun charges.