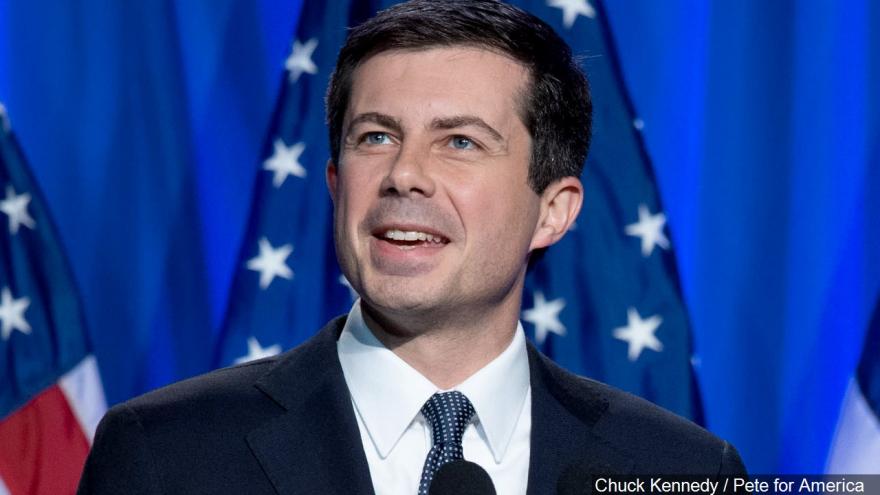 (CNN) -- Singer, actress and Pete Buttigieg campaign surrogate Mandy Moore dismissed suggestions Monday that the former South Bend, Indiana, mayor is beholden to elites, saying she doesn't "think that Hollywood even knows what to do with him."

Moore joined Buttigieg on the trial in Iowa Monday as Democratic candidates are making their final appeal to voters ahead of the last debate before the Iowa caucuses next month.

Rival campaigns have sought to cast Buttigieg as being cozy with donors and other influencers, including those in Hollywood, as he's chosen to host lavish fundraisers, unlike some of his competitors.

"I've actually never heard that before, and I would say absolutely not -- cozy with the Hollywood folks? Pete? No," Moore told CNN in an exclusive interview Monday night, following a town hall where the "This is Us" star introduced Buttigieg on campus at Iowa State University.

Moore has campaigned previously for the Buttigieg campaign, joining his husband Chasten Buttigieg in a series of events in Florida and Louisiana focused on the arts. Monday, however, marked the first time Moore introduced Pete Buttigieg in an open-to-the-public town hall.

"I don't think that Hollywood even knows what to do with him. He's that much of an original right? He's a Midwestern mayor who took office at 29 and turned around a city on the brink. He's a Navy veteran who saw firsthand the cost of endless war. But he's also just this brilliant, plain spoken millennial who speaks half a dozen languages!" Moore said. "And honestly, I think that's, that's what we need right now in this country. Because we're not in a TV show. This isn't a movie, right? It's our reality, and the reality is our country's in crisis."

Moore told CNN she felt an obligation to lend her support to the former mayor's bid for president, even if it ran the risk of alienating potential fans.

"I don't think that anyone can sit this one out. I again, have been sort of hesitant to speak out politically in the past," Moore told CNN, "Because of that fear of people, I think, people often believe that people in the public eye shouldn't have a seat at the table in terms of offering what their opinion may be when it comes to politics, and I just I disagree."

"I think we all need to use whatever platform we have to not only educate ourselves about the different candidates that are out there, but to get out and vote. I mean, this is, it's too important to stay silent," she said.

She told the audience of hundreds gathered at the Memorial Union Grand Hall on campus that politics is "new ground that I'm treading."

"I'm not the most political person publicly. Privately, it's something I'm obsessed with, but when I first saw Pete and came to learn about him and his campaign, it was a no-brainer, I had to support," she said.

Speaking to CNN, Moore said she would support Buttigieg the campaign sends her, including the early state of New Hampshire, where she was born, or her home state of Florida, a crucial swing state in the general election.

"I mean, I'll go wherever the campaign wants to deploy me I am. I am a proud surrogate, and I'll do whatever I have to do," she said.