Manhunt for suspect who killed a Houston doctor ends in suicide 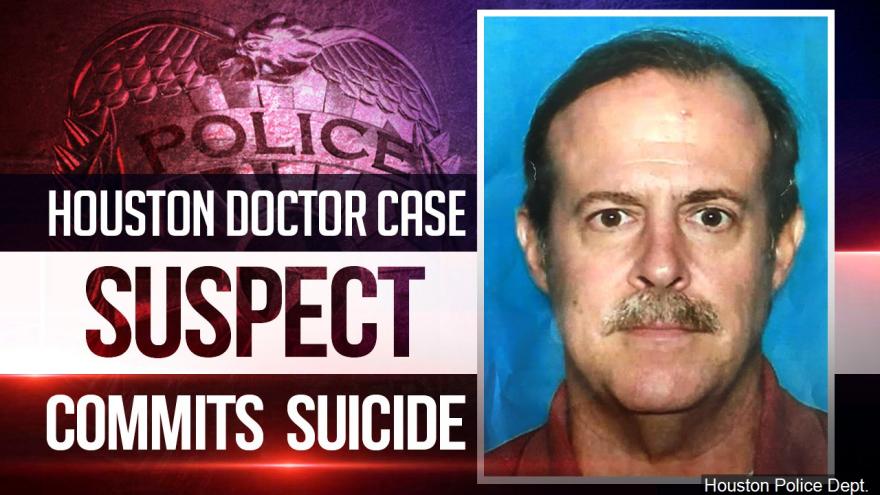 Fourteen days later, Pappas took his own life as an intense manhunt closed in on him.

In the space between, a decades-old grudge surfaced as possible motivation -- Hausknecht performed an operation on Pappas' mother 20 years ago. Police allege Pappas had long plotted his attack on the physician to avenge his mother's death on the operating table.

After the doctor's killing, Pappas got his affairs squared away as he planned his own death or disappearance -- even while apparently trying to throw investigators off his trail.

This is what we know about what Pappas was doing in his last days:

Thursday, July 19: A day before the shooting

Pappas, a real estate broker and former constable, prepared to transfer the deed for his three-bedroom, 2,100-square-foot ranch house in Houston to a woman he knows in Ohio.

A courier, Joe Donalson, says Pappas asked him on this day to pick up paperwork relating to the deed, but Donalson couldn't pick it up.

Hausknecht, a 65-year-old doctor whose patients included former President George H.W. Bush, is shot and killed while on his roughly 2-mile bike commute to Houston Methodist Hospital, where he'd worked over three decades.

Hausknecht and the gunman were seen riding their bikes in the same direction on the same street, and soon afterward, Hausknecht was shot in front of a hotel, not far from the hospital, police say. The gunman is believed to have pedaled away.

Georgia Hsieh, the renowned cardiologist's wife, would later say, citing police, that her husband was riding through a construction area when the gunman rode up in front of him, turned around to face him and fired three shots.

Police release a composite sketch of the suspected gunman.

The public gets its first look at surveillance images of the cyclists -- and it's becoming apparent that the suspected gunman was following the doctor.

Houston police release four still images from the day of the shooting. In the first three, Hausknecht pedals north on Main Street, crossing an intersection around 8:47 a.m. on July 20. A suspect follows.

In the fourth image, the suspect is pedaling away at 8:48 a.m., "moments after the shooting," police say.

Pappas contacts Donalson again. The courier goes to Pappas' home to fetch the deed paperwork and take it to a courthouse, Donalson recalls later.

Pappas was acting "very nervous," Donalson said. Pappas cracked the door open and peeked out, then opened the door wider.

He was "looking up and down the street, to see if anybody else was there. And then he passed me the envelope," Donalson said.

Donalson said Pappas called him three times that day to make sure the documents were filed.

This is also the day that Jeanette Spencer, of Painesville, Ohio, who had known Pappas for 25 years, learns that his home was being deeded to her. She received notification in the mail, she later tells northern Ohio's News-Herald newspaper.

Also this day, police give the public its first up-close look at the suspect, releasing video and still pictures captured from a Houston Metro Lift Bus on the day of the shooting.

The images show the suspect trailing Hausknecht closely on Main Street, just three blocks from where the surgeon was shot.

By now, police are saying the suspect wore a blue, short-sleeved polo shirt; a ball cap; khaki shorts; and an olive green backpack.

Spencer, the Ohio woman, calls Pappas this day. He tells her he's deeded her the home because he has a terminal illness, she recalls later to the News-Herald.

By now, someone has listed several guns, ammunition, tactical vests and ballistic plates for car doors on a firearms auction website.

The items are listed anonymously, but they include a contact phone number that turns out to belong to Pappas' real estate company. The listings are timestamped in the late morning of July 25.

(CNN reported about these postings the following week, after police named Pappas a suspect. It's unclear whether any of the equipment had any connection to Hausknecht's killing, and Houston police haven't commented on the ads.)

On July 25, police still are a week away from naming a suspect in Hausknecht's death. But Houston Police Chief Art Acevedo said this day that he believes there was a high probability that Hausknecht was targeted.

Acevedo declined to say why he believed so, and he emphasized that investigators still were not certain of the motive.

The cause of death was "gunshot wounds of the head, torso and left upper extremity," the Harris County Institute of Forensic Sciences says.

Pappas, it appears, is still at home.

Errol Francis, one of Pappas' neighbors, recalls that he saw him mowing the lawn on this day.

Communications between Pappas and Spencer, his friend in Ohio, appear to have taken an alarming turn.

Pappas texts Spencer to say he is committing suicide, and gives her instructions on how to secure the house, she recalls to the News-Herald.

"Sorry for handling things this way," the text reads, according to the News-Herald. "House and property is now yours. Please make the best use of it for you and (your daughter)."

Spencer says she tried to call Pappas, but the calls went straight to voicemail. She then called police, she tells the News-Herald -- but it's unclear when she called.

Meanwhile, Houston police release new footage of who they believe is the gunman.

They say it's another surveillance video and a new set of still pictures showing the suspect on a bike in a neighborhood around 8:49 a.m. July 20, "immediately following the doctor's shooting."

Tuesday and Wednesday, July 31 and August 1

A number of developments turn investigators' attention toward Pappas.

Police on July 31 get a tip from two neighbors that he may be the bicyclist in the surveillance video released a day earlier.

Also, an out-of-state family friend tells police that she texted Pappas to see whether they could get together, but he responded by text to say he was going to kill himself, police say later in a probable cause affidavit.

That woman's mother then tells police she had recently received the deed to his house and the title to his vehicle, and that subsequently Pappas told her he had a terminal illness, according to the affidavit.

It's not clear whether the woman in the affidavit is Spencer, the woman who talked to the News-Herald.

Officers go to Pappas' home and don't find him. But over two days, investigators do find materials that showed Pappas was intensely interested in Hausknecht, and it appeared that his mother's surgery 20 years ago was a link, police have said.

The material included "a very extensive intelligence file" on Hausknecht, containing information about the surgeon's residence, place of employment and other personal information, Police Chief Acevedo has said.

"If you think about his fascination with the doctor ... the only thing we can think of is the connection between his mother dying over 20 years ago during surgery," Acevedo said. "We can't say definitively that that's the motivation behind this killing, but there's nothing else that would explain it."

According to the affidavit, police also found:

-- Pappas' last will and testament, in his kitchen.

-- Three boxes of .22-caliber ammunition in the garage. (Police have said .22-caliber shell casings were found at the site where Hausknecht was killed.)

-- A large piece of metal near the house's front door placed in a way to buttress the door "against any attempt to force entry into the residence."

-- Pappas' black Ford Crown Victoria in the garage with the back seat removed, leaving enough room for a bicycle to be placed there.

-- A draft of what would have been a report to police alleging that a 10-speed Schwinn bicycle had been stolen sometime between July 19 and July 25.

Police have said he owned such a bike, and that the stolen bike report was never sent to police. In the affidavit, a police officer writes that people who use vehicles in a crime often report them stolen, so that they can distance themselves from the vehicle should it be identified by witnesses.

On August 1, Acevedo holds a news conference and names Pappas as a suspect in Hausknecht's death, and the manhunt is on.

Police still don't know where Pappas is, but they return to his home on this night after someone called to report a man riding a bike near the home.

A responding officer reports seeing light inside the home and a back gate open. But police find no one there.

It's not clear where Pappas was this week, especially from the time police began searching his home July 31. Acevedo tells reporters later that Pappas:

-- May have been camping.

-- May have had his bicycle.

-- May have entered homes that were on the market. Pappas, as a real estate broker, had a key that gave him access to homes listed for sale. "We can tell you that he used that key four times," Acevedo said, while not revealing which homes Pappas visited, when he visited them, what he did there or whether anyone else was present at the time.

This is the day, police say, Pappas kills himself.

Here's how it happened, according to Acevedo:

A Houston parks board member, while checking on an area that has been plagued by vandalism, encounters a man in the morning. The man starts walking away.

"(The board member) actually yelled, 'Hey, I'm sorry, I thought you were a graffiti vandal,'" and Pappas kept walking, Acevedo said. The witness said he then noticed a wallet on the ground -- and it contained Pappas' identification.

Recognizing Pappas as a suspect in Hausknecht's killing, he called police.

A police officer arrived and confronted Pappas, who didn't follow the officer's commands and had his right hand hidden. The officer takes cover, and a second officer arrived, giving Pappas virtually no place to go.

Pappas then shot himself in the head.

He was found with a revolver in his hand and a bulletproof vest beneath his shirt.

What were Pappas' plans? Acevedo says he doesn't know.

But given that Pappas was wearing a bulletproof vest, Acevedo says he doubted Pappas planned to end his own life when he did.

Did he intend to kill anyone else? Acevedo says there's no evidence to show that.

Avecedo says Pappas' intelligence file on Hausknecht included a page that, besides having the doctor's personal information, also had the names of some employees at the Texas Medical Center. Acevedo said he didn't know why those names were there.

"I don't think we have enough information to say it was a hit list," Acevedo said.